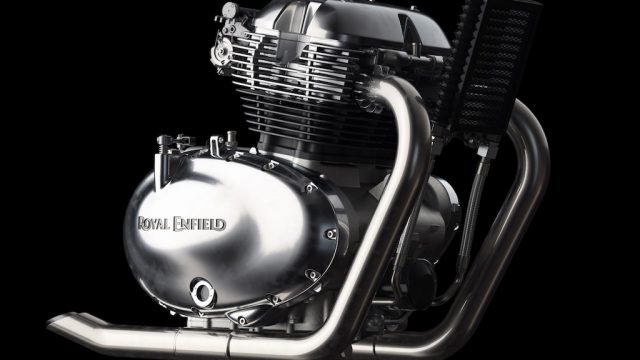 The 75th EICMA Milan Show which opened on November 7 saw the long awaited debut of not one, but two all-new 650cc parallel-twin Royal Enfields, the retro-styled Interceptor INT roadster, and the Continental GT café racer that’s available in either single-seat or dual-seat mode..

The two new bikes are powered by the first Royal Enfield twin-cylinder engine to be built in the modern era, ever since production of its 700cc Interceptor ended when the Redditch-based UK company closed in 1970. Almost 50 years later its Indian counterpart is the World’s largest manufacturer of middleweight motorcycles, with 667,135 examples of its established range of pushrod singles produced and sold in the company’s most recent fiscal year ending on March 31. A massive 96% of those motorcycles were sold in India, leaving just 4% for export – in spite of which, there’s still a two-month waiting list for its most popular Classic 350 model.

You can also read: Hottest Motorcycles of 2018

The opening earlier this year of its third new factory at Vallam Vadagal, on a 50-acre site outside Chennai, will allow annual production to expand to 825,000 units during the current fiscal year, and to 960,000 bikes by 2019, with an increasing number of them the two new twins.

Each of these is powered by the same air/oil-cooled single overhead-cam eight-valve 648cc parallel-twin engine developed at Royal Enfield’s brand-new UK Technology Centre near Leicester. This is fitted with a single gear-driven counterbalancer to reduce vibration from the engine, whose 270º crankshaft is a forged one-piece item for extra strength and durability. Measuring 78 x 67.8 mm and with central chain camdrive, this fuel-injected motor employing a Bosch ECU produces a claimed 47 bhp at 7,100 rpm, while maximum torque of 52 Nm is delivered at 4,000 revs. The six-speed transmission features a slip/assist clutch – a first for Royal Enfield. A low 9.5:1 compression ratio denotes a low state of tune, most likely to ensure it runs well even on poor-quality fuel, which is injected via a Bosch system.

The tubular steel cradle frame that’s common to both models carrying this new twin-cylinder motor has been developed by Royal Enfield’s subsidiary Harris Performance, and carries a conventional and non-adjustable 41mm fork set at a 24º rake and giving 110mm of wheel travel, with the twin rear shocks operated by the box-section swingarm providing just 88mm of give. 18-inch Pirelli Sport Demon tyres are fitted as standard to the skinny wire wheels, with braking supplied by a single 320mm front disc gripped by a twin-piston caliper, with a 240mm rear. Bosch ABS is fitted as standard, helping to achieve Euro 4 compliance for both bikes. The Interceptor weighs in at 202kg with oil but no fuel, compared to 189kg for the Continental GT, while the low 804mm Interceptor seat height (790mm for the Continental with a solo seat, or 793mm with a passenger) means that most customers will be able to put both feet flat in the floor at rest. No word on pricing, yet – but deliveries will commence in April 2018 of bikes which will be entirely manufactured in India.

Given Royal Enfield’s ultra-competitive price structure in export markets with its singles, expect the company’s new twin-cylinder models to be a fraction of the price of their most obvious rival, the Triumph Bonneville developed just 15 miles away from Royal Enfield’s brand new magnificently equipped UK Technical Centre near Leicester, which opened last year and presently houses 115 employees. They’re led by the company’s Head of Product Development, Simon Warburton, formerly of Triumph, and Mark Wells, Head of Product Strategy & Industrial Design, whose former company Xenophya Design was responsible for styling several Triumph models. With several other former Triumph employees having moved to Royal Enfield’s new British R&D HQ, these new Indian-made Royal Enfield twins are serious competition for the Thai-built Bonnevilles. However, while Triumph’s current Bonneville models all carry either liquid-cooled 900cc or 1200cc motors, the new Royal Enfields are air-cooled 648cc twins, so in terms of performance they’ll lose out to their Triumph rivals. But for RE’s target audience, that’s unlikely to matter very much.

Introducing the new models, Royal Enfield CEO Siddhartha Lal said, “The Interceptor INT 650 carries forward the Royal Enfield legacy into the 21st century. While in its essence it retains the design and old-school character, it has all the underpinnings of a modern machine. It combines agility, usable power, excellent ergonomics and style in an unintimidating manner. However, the Interceptor INT 650 is more than the sum of its parts – it’s great fun to ride and brings a smile on your face every single time that you ride it. The engine has been designed to offer the right balance between power, torque and usability, so as to ensure a smooth and unintimidating riding experience. It will offer a broad spread of torque which will make the motorcycle easy to ride without frequently shifting gears.”