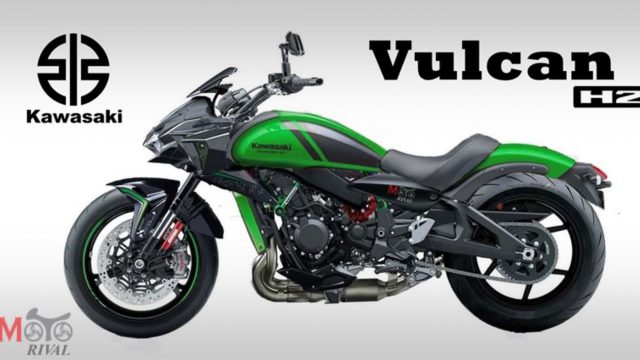 Kawasaki could be working on a new supercharged model in the form of the Vulcan H2 according to Moto Rival and Young Machine. The rumours started after Kawasaki said that they’ll upgrade their Vulcan model range soon. We might be looking at a new 200hp cruiser borrowing tech from the Ninja H2 superbike.

The Japanese manufacturer has a couple of models fitted with a 998cc supercharged engine. Each of them comes in different motorcycle categories. So, the superbike segment has the Ninja H2 and track-only H2R boosting 170 kW (231hp) and 228 kW (310hp). After that, the sport-touring model range received the Ninja H2 SX (147.1 kW/ 200hp) while last year Kawasaki unveiled the super naked Z H2 model delivering 147.1 kW (200hp). Taking all these facts into count, it seems that Kawasaki is planning to build a supercharged model for each motorcycle segment.

If this model will ever see the day of light, the rivals in the power cruiser segment are the Ducati Diavel 1260 S (159hp) and the Triumph Rocket 3 R (165hp). Thus, the Vulcan H2 delivering 200hp from its 998cc inline-four will outpass the competition as far as the power figures go. The bike will have the powertrain of the Ninja H2 fitted on a new Vulcan chassis. Other features could include a single-seat setup and the front end borrowed from the Z H2 model.

Moreover, according to Indian Autos Blog, Kawasaki is working on a new power cruiser, but there are no official details from Kawasaki if the bike will be fitted with the supercharged H2 powertrain or not. The development could take between one and three years, thus we could see more details about the upcoming power cruiser next year.