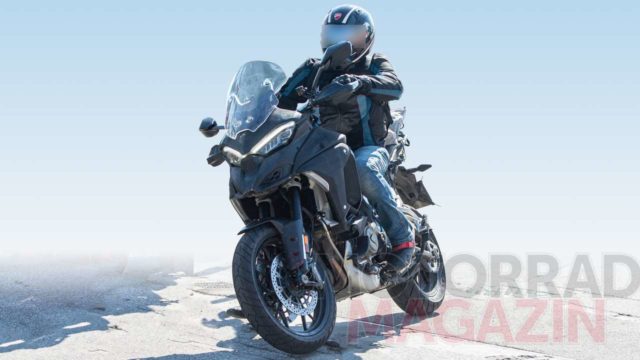 The upcoming Ducati Multistrada V4 has been seen again on the streets during some tests according to Motorrad Magazin. It looks like the adventure motorcycle is closer to the production from than last time we’ve seen it riding on the streets.

It’s not the first time we hear rumours of an upcoming Multistrada model as Ducati is ready to fit their V4 engine we’ve seen on the Panigale V4 superbike model and the Streetfighter V4 supernaked on an adventure motorcycle, namely the Multistrada V4. Also, Ducati CEO, Claudio Domenicali, has confirmed a year ago that the brand will have a V4 engined Multistrada model in the upcoming years. 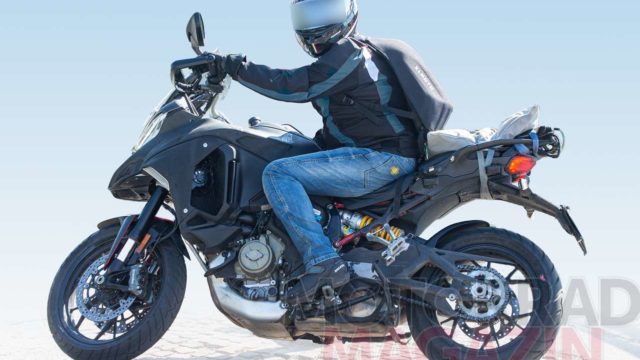 Now the adventure motorcycle looks closer to the production form. Moreover, it’s been caught again on camera during some test. So, what we know taking into consideration what we’ve seen from the first Ducati Multistrada V4 spy photos is the presence on the adventure motorcycle of the ARAS radar on the windshield which should be a part of Ducati Roadmap 2025. The bike is set as a 2021 model and could be unveiled this year in full production form.

Moreover, this time around, the Ducati Multistrada V4 has no camouflage on its fairings and we have a chance to glance at the full bodywork. So, it’s equipped with a 19-inch front wheel mounted on Pirelli Scorpion Trail II tires. Also, this could be just one of the bike’s versions and Ducati could prepare a 17-inch front wheel model fitted with probably Pirelli Rosso Corsa 2 to enhance a road-going version. Thus, targeting rivals like BMW S1000XR which we’ve tested at the BMW media launch event in Spain back in March. 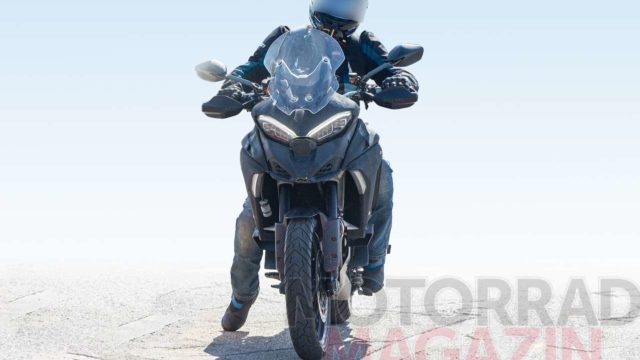 But, let’s look beneath the fairing. Engine-wise it could stand between the 1260 and 950 models and have the 1100cc V4 engine from the Panigale model probably delivering around 180 hp to make it stand out from its rivals like BMW and KTM. It could have a different mechanical configuration to deliver those power figures instead of just an advanced electronics package.

Ducati Multistrada V4 comes with semi-fairings which have wide air intakes and exhausts on the flanks, on each side of the radiator. Another new feature is the exposed trellis subframe and open, triangular swingarm.

Other components, as we can tell from looking at these motorcycle spy photos, seem borrowed from the current Multistrada models like the y-spoke circles on the wheels similar to the 950 version, as well as the yellow off-set rear shock with a piggyback reservoir. The headlights are new with a design inspired by the Panigale and Streetfighter models which in this case the headlamp cluster has an LED strip making the adventure motorcycle look mean and aggressive. 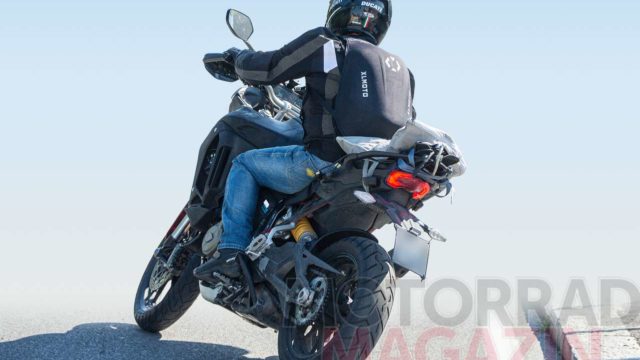 We’ll have to wait and see if the new Ducati Multistrada V4 will replace the existing 1260 model range and if the company will choose 19-inch, 17-inch front wheel or we could see the adventure bike come in two versions. Although we know that 2020 EICMA Motorcycle Show has been canceled, the bike could be unveiled online or in a special event concerning the current Covid-19 situation. 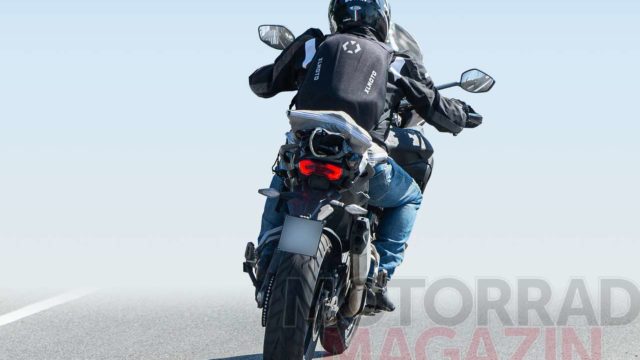