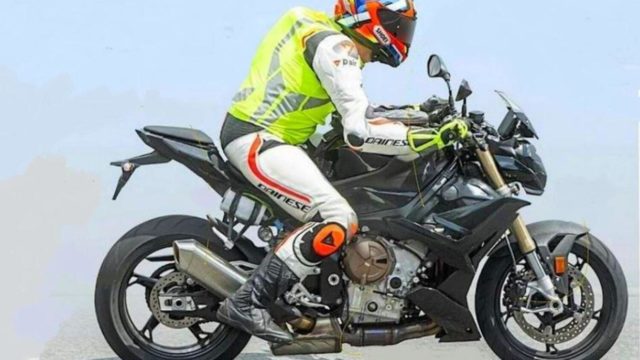 The new BMW S1000R supernaked motorcycle has been spotted on the streets during some tests according to Motorrad Online. It comes packed with a couple of new features borrowed from the S1000RR superbike.

The photos were published in the Motorrad Magazine and the German media says that the BMW S1000R will come as a 2021 model. What is interesting about these motorcycle spy photos is the motorcycle’s design. It’s close to the current F900R naked bike with its round headlight (you can check our review of the F900R by clicking here). Likely, most of us would have expected a more aggressive bodywork to rival with BMW’s supernaked motorcycle segment competitors. We’re talking about models such as Ducati Streetfighter V4 S, KTM 1290 Super Duke R or Kawasaki Z H2.

Most of the new features are borrowed from the latest generation of the BMW S1000RR superbike which was launched last year. Thus, the BMW S1000R supernaked has a new design for the aluminium alloy frame that surrounds the engine. Also, it has just a single headlight compared to the two ones of the current S1000R. As far as the bodywork goes the supernaked motorcycle still lacks any aerodynamic winglets like we see fitted on the Ducati Steetfighter V4.

Engine-wise it could feature a similar version of the current 2020 BMW S1000XR (you can check our review of the S1000XR by clicking here) but it could deliver more than 165 HP and more midrange torque. In order for the supernaked motorcycle to be competitive with its rivals, the power delivery should be around 200 hp at least, bear in mind that the BMW S1000RR makes 207 hp. Also, we have to wait and see if the German brand will fit the 2021 BMW S1000R with Shiftcam variable timing distribution.

Looking at the 17-inch wheels they seem to have a design close to the one we see on the current 2020 BMW S1000XR. Moreover, the double-sided swingarm has a different design than the one fitted on the S1000XR to fit the characteristics needed from a supernaked motorcycle. The 2021 BMW S1000R we see in these spy photos has a TFT dash, perhaps similar to the one fitted on the F900R and it’s interesting to see if the supernaked motorcycle will come with the new Active Cruise Control BMW launched at the end of last month.