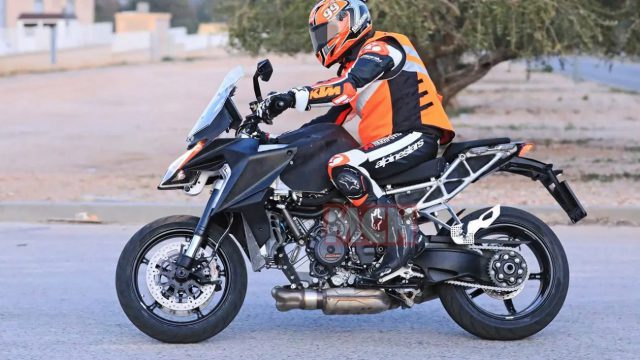 A new KTM 1290 Super Duke GT has been spotted making some tests on the road according to these spy photos from MCN. It looks ready to take on its rivals.

From what we can tell from the spy shots, the 1290 Super Duke GT has a new trellis chassis and subframe. The frame has a simple design similar to the one the Super Duke R model. Gone are the lower frame components from the current model. The new subframe design looks ready to handle some heavy luggage duty for long touring trips.

Moreover, the engine is a stressed member of the frame and looking at the new exhaust system, most likely it meets Euro 5 regulations. There’s a new central airbox intake between the headlights and a larger radiator. It’s interesting to see how KTM revised the engine to offer more torque in the low and mid-range. The current engine on the 1290 Super Duke R delivers 180 hp and 140 Nm of torque.

The swingarm appears to be similar to the one fitted on the 1290 Super Duke R. So, it could be 15% stiffer and have a pivot 5mm higher than the current unit to offer more stability under acceleration.

The wheels are also from the super naked model and looking at the spy photos, the bike is equipped with the Pirelli Angel GT tyres. We can also see that the bike is fitted with a new dash, probably featuring a TFT display.

We could see the new KTM 1290 Super Duke GT model revealed at this year’s EICMA show in Milan and we’ll have to wait and see what price tag the new machine will have.