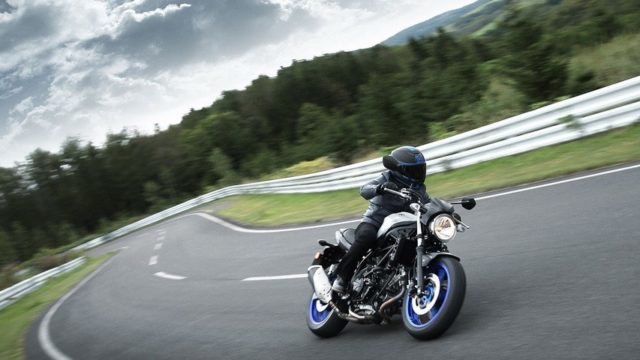 Suzuki is the comeback hero this year. After presenting the new GSX-R 1000 it was the time for another successful name: SV 650 – a bike with simple and appealing look equipped with a fun and reliable V-Twin suitable both for beginners and experienced ride

The SV 650 story begins in 1999, when Suzuki introduced a middle class naked powered by a 650 cc 90˚ V2. “V-Twin fun” was the concept; a simple and reliable bike was the result. The handling was good and the throttle gave a nice but easy to manage power punch. After four years, Suzuki changed the frame and introduced the fuel injection, things that draw some criticism. The model lived until 2009, when Suzuki completely changed the design and the name to Gladius, a name that didn’t manage to get the same attraction.

Now the SV is back. And the only similar thing to the first model is the classic round headlight. That’s because the new steel frame looks similar to the one used on Gladius, but it’s lighter.

Although it has the same displacement, the 650 cc engine was updated with “more than 60 new parts”, according to Suzuki, in order to produce more power and stronger torque in low and midrange rpm. It meets the Euro 4 regulations and develops 76 horsepower @8,500 rpm and a 64 Nm torque. So it’s stronger than its adventurous brother – the V-Strom 650.

Suzuki also says that the new SV 650 has a “low-rpm assist feature” which makes the bike capable to deliver “more consistent and powerful launch from a stop”.

The brakes have medium specifications – 290 mm front disc and conventional Nissin calipers – but it shouldn’t be a problem for this kind of bike.

The dashboard is an LCD, similar to the one on GSX-S1000, which is not such a classic choice, but is capable to show the speed, odometer, fuel consumption, or range.

Our first impression when we saw the SV 650 2016 at EICMA 2015 is that this is a kind of modern bike – but not with so many high specs – (a Gladius, let’s say) wearing retro-inspired clothes but without a retro badge in the name and marketing campaign.