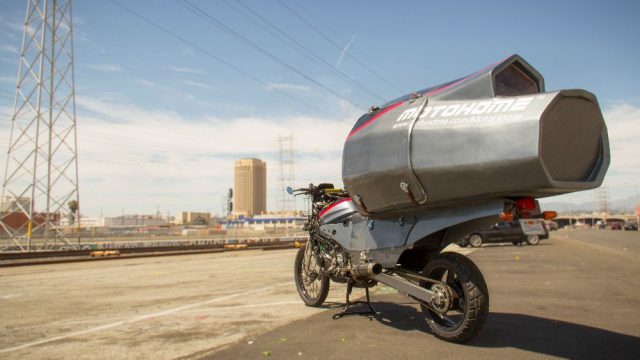 South California School of Architecture graduate Jeremy Carman designed a mobile home that looks like a spaceship escape pod and which can be installed on the back of a motorcycle. Jeremy calls it a MotoHome and he initiated a GoFundMe campaign to raise money for proper prototyping.

The MotoHome can only be installed on a bike with an extended swingarm to compensate for the new weight distribution. Carman used a regular Honda CB500 street bike for the initial MotoHome, but replaced the fork with a CR500 one that can handle rough terrain better. 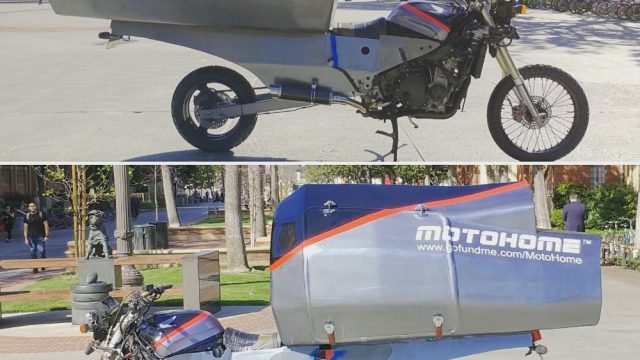 The pod itself is made from lightweight materials and its walls are lined with thermal insulation. Jeremy claims that the pod only weighs 16 kilos (35 lb), and loading it with the bare necessities should not make it too heavier, either. The sleeping pod sits on a steel structure bolted to the bike, with the space underneath being used as storage for the camping kitchen, for a true all-in-one spirit. 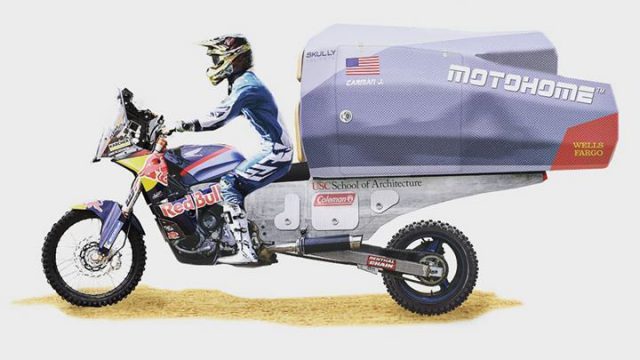 Jeremy’s idea may seem a bit far out, but if you look at it long enough, it makes perfect sense. The car world has RVs, but in the motorcycle segment, it’s either a tent or a trailer. Non-leaning trailers make riding a motorbike a pain in the… back, while raising and packing a tent consumes time and comes with specific restrictions in terms of terrain, weather conditions and outside temperature.

The MotoHome solves many of these problems as it is weathertight, insulated, and it forms a single piece with the bike. Sure thing, riding a motorcycle with a MotoHome attached on it will be a lot different than riding a casual street bike. A much higher center of gravity, way larger wheelbase and more surface for lateral wind will make getting used to riding a MotoHome a steep learning curve, but it seems doable, nevertheless.
It looks like a fully-functional MotoHome could bring together the best of both worlds, mobility and on-the-road comfort blending with unlimited, entirely autonomous possibilities. We’ll definitely know more after Jeremy returns from the 32,000 km (20,000 miles) voyage he plans to go on through South America and back.

We’d advise him to install a reinforced side stand and four tie points for winch ropes tied to strong steel pins stuck in the ground. This way, he’d make sure the bike won’t tip over during the night…

You can help Jeremy by supporting his MotoHome public funding campaign here and watch the video below.