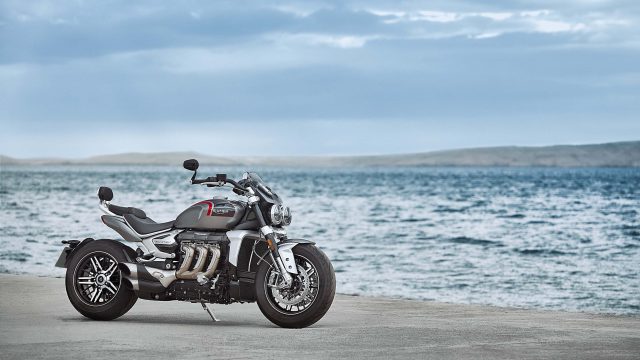 Triumph unveiled the 2020 Rocket 3, in its final shape. It features the massive 2,5 liter triple engine and comes in two different versions

Picture this: 221 NM of torque at 4.000 rpm and 167 horsepower at 6.000 rpm, some fancy electronics to keep it under control and 40 kg less. This is the new Triumph Rocket 3. Keeping to the original tradition of having the largest engine of any production motorcycle, the new models have received a 200cc buff, enlarging the engine to 2500cc. There are more than 50 accessories available and it is said that the price will be around 22.000 euro.

The new Rockets have received a major change to their chassis, which is made out of aluminum, the engine being included as a stressed member – there's a central hollowed spine that doubles as an airbox bolted around the heart of the machine. This saves around 22kg and, along with the 18 kg weight reduction that the new engine have, make the new Rockets 40kg lighter. Still, this is a heavy-weight bike – it weighs 291 kg dry. Add the 18 liters to the fuel tank and you'll get a 310 kg motorcycle in running order.

Having a fully adjustable Showa monoshock rear suspension with piggyback reservoir and 47mm adjustable Showa front forks Triumph promises exceptional handling, riding comfort and touring capabilities, and with the superbike-spec Brembo Stylema calipers, the stopping power should be assured even for a bike like this one.

Technology wise the R and the GT will also be receiving improvements such as cornering ABS and lean-sensitive traction control and cornering traction control – all of them supported by an IMU (Inertial measurement unit) that constantly measures lean angle, yawn, pitch, roll  and acceleration rates and responds with the appropriate active safety features. There are also four riding modes available, so if being afraid of the full-power beast you can just ride it in "Rain".

As for gadgetry, the new Triumph Rocket 3 will have the second generation of TFT dash that we can also find on the Triumph Scrambler 1200. The new dash features Bluetooth Connectivity that enables Smartphone pairing – you can select the songs, make phone calls, get turn by turn navigation (thanks to Google Maps) and even control your GoPro.

Although the R and the GT are two different models with different riding styles, one being more sporty and the other one being a more laid-back cruiser, the only visible differences are the finishes, seat hight and handlebars (the GT is 23 mm lower and the handlebars are pulled back by 125mm) and all parts are interchangeable. There's a full list of accessories – more than 50 items that you can fit on the Rocket – different handlebars, seats, luggage system, a windscreen and so on.

The prices will be announced on 19th of November 2019, but it said that the R version will cost around 22,000 euro, while the GT will be a bit more expensive.