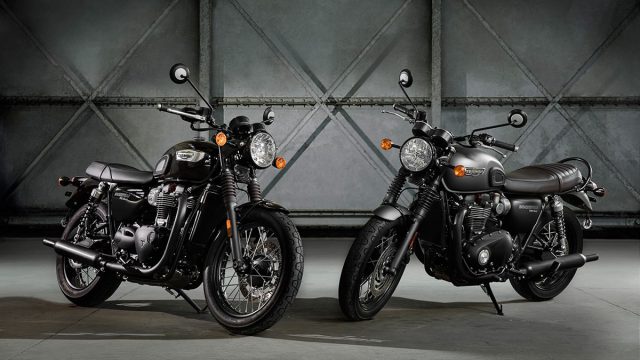 The British company comes up with a brand new model to keep alive the T100 series. It is lighter, shorter and more refined than the former model. Based on 900 cc engine the new Bonneville inherits the old British twin's lines and character.

In the struggle to align all the bikes to Euro 4 regulations, things went rather beautiful for some of the motorcycle manufacturers. Triumph released for this year the T120 and T120 Black, a very agile, handsome and safe bike. We felt in love with its fine character after the first kilometers.

But what about the T100 series? It had to continue. The inspiration came from the ’59 original Bonneville, like the T120. The resemblance to its bigger brother is hard not to spot.

The lines of this new T 100 bring up a lot of character. You can choose the standard T100 or the black edition painted in raven black. With great attention to details and a clean finish, this bike can be added in the dictionary next to retro motorcycle definition.

The new Bonnie is lighter than the T120 and has a different trail and a shorter wheelbase. Triumph claims it will be more accessible and will easy handle every type of rider. The new smaller 900cc engine produces 54 bhp [ 40.5 kW ] and will get all the goodies that its bigger brother already has.

The T100 will benefit from Ride by Wire throttle and the same safety package as the T120. The safety package includes ABS system and switchable Traction control. Although the bike keeps the retro looks comes with a LED rear light and a trip computer nicely blended in the analog clocks.

Triumph offers over 150 accessories for you to build the Bonneville of your dreams. To spice things up, the new T100 will be available for the A2 license also with an easy to fit kit provided by the dealer.

Alongside the T100 and the T100 Black, Triumph revealed two street cup Cafe-Racers with low handlebars, fly screen and a sportier riding position.