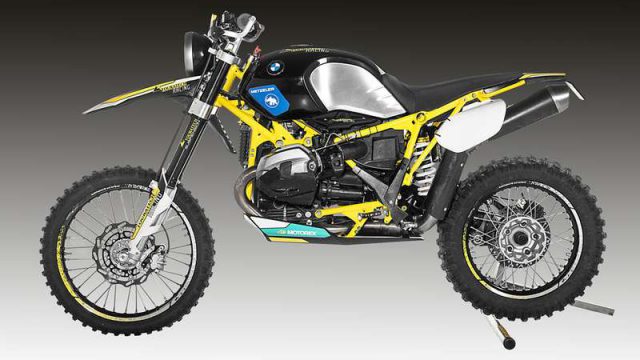 This badass 1,200 cc bike rocked on the toughest hard-enduro rally on Earth.

The R9X is Touratech’s latest project specially designed to tackle one of the hardest enduro competitions in the world – Red Bull Romaniacs. With BMW instructor and enduro specialist Gerhard Forster behind the handlebars, the R9X not only managed to finish the Carpathian challenge, but also finished 14th in the Iron Class.

This year marked the first time in 14 years that a two-cylinder bike entered the Romaniacs competition. Three bikes were announced to take the start, the R9X with Gerhard Forster, KTM 1090 Adventure R with Red Bull Romaniacs winner Chirs Birch, and KTM 1090 Adventure ridden by multiple Baja 1000 winner Quinn Cody. All three bikes were entered in the Iron Class. Unfortunately, Chris Birch was not able to ride in the competition due to a hand injury in the training session before the race.

The starting point for the R9X is a BMW R nineT developed and built by Cliff Vizer and Patrick Graf from Touratech. The bike got a new rear end, a new seat, side covers and various adaptations thanks to the TT-3D department — especially Dirk Bendl. The suspension chosen is a long travel front end, probably borrowed from the BMW F800GS and adapted by Touratech’s suspension specialist Lars Würdemann. The gas tank is a lightweight aluminium unit while the exhaust is replaced by a high mounted enduro looking mufller.

A skid plate and cylinder protection were added, as well as an LED headlight. The wide enduro handlebar is raised and, combined with the knobby tyres, it helps it blend in the lightweight MX bikes. The whole project was built with the help of Touratech’s three CEO’s: Herbert Schwarz, Jochen Schanz and Martin Wickert.