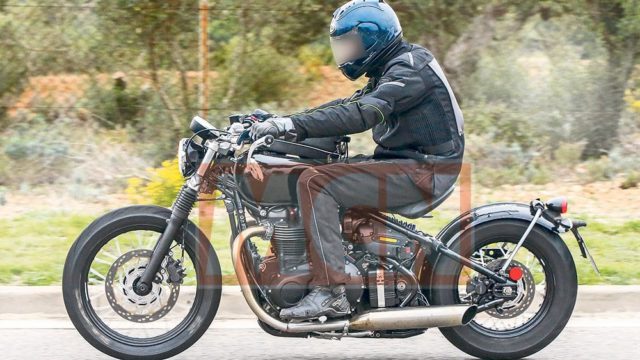 Triumph is working on a Bonneville-based bobber. According to the rumors in the market, it will be a 2017 model.

The spy-photos revealed a near-production bike, with only some details to be refined. Even that ugly reflective-element is already on the swingarm.

The Triumph bobber will be a show-off bike. When looking from the side, it seems to be a hardtail. But if you pay more attention you can see the mono shock linking the frame to the swingarm. The two exhaust pipes look harsh and aftermarket, but they are carefully studied to meet the Euro 4 regulations.

Another nice details are those fork gaiters and the mirrors, positioned under the handlebar. As for the engine, it seems to be the already-road going 1,200 cc inline two cylinder found on the newly-revamped Bonneville family.

The motorcycle is fitted with ABS due to European regulations, but it has only one front brake disc instead of two. It will be also interesting to see if the bobber will have the same electronics as the other Triumph retro motorcycles, such as ride-by-wire, traction control, and different riding modes.

According to MCN, the Triumph bobber will be revealed at this autumn’s EICMA show in Milan and will hit the market as a 2017 model.