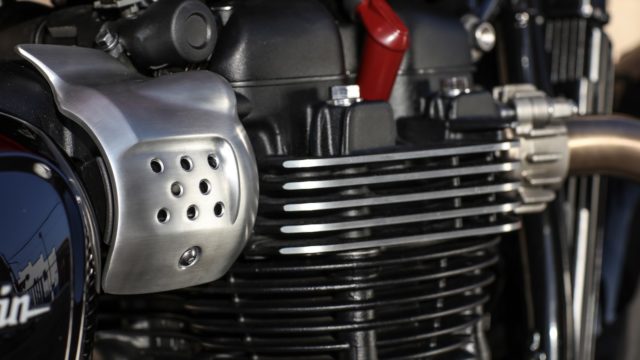 Triumph Street Twin is the most accessible but less powerful classic bike from the new Triumph retro line-up.

Since Triumph revamped its entire classic motorcycle class, the engine capacity of the twins grew to 1,200 cc. But one model – the Street Twin – makes the difference. The new eight valve parallel twin has 900 cc, but is still bigger and more advanced than the old Bonnie engine: it delivers 80 Nm@ 3,200 rpm, 18% more than the previous model. On the other hand, the engine power is not intimidating at all: 55 horsepower. Unlike its 1,200 cc brothers which have a six speed gearbox, the Street Twin has only five speeds.

Still, it has ride-by-wire fuel-injection and advanced specs as traction control and a slip assist clutch. The singular clock resembles the old Bonnie’s dashboard, but has a more modern aspect and a digital menu which can be accessed by a handlebar mounted scroll button and show the gears, the odometer, the range and other information.

New Triumph Street Twin has an USB socket under the low height seat (750 mm – which makes it one of the most low seats on a standard motorcycle). The seat height is not the only thing that makes the bike suitable for a beginner: the weight is 198 kg (dry), while the traction control and ABS are responsible for a safer ride.

The braking system consists of a single 310 mm front disc and a 255 mm rear disc, both with a two-piston Nissin caliper.

The fuel tank can hold only 12 liters, which means that it’s not necessary a touring-focused bike.

If you are a custom-bike fan, Triumph gives you the opportunity to pick from 150 different custom items. If you don’t have proper inspiration, the Hinckley guys already created some configurations: a Scrambler kit, a Brat Tracker kit and an Urban Kit.