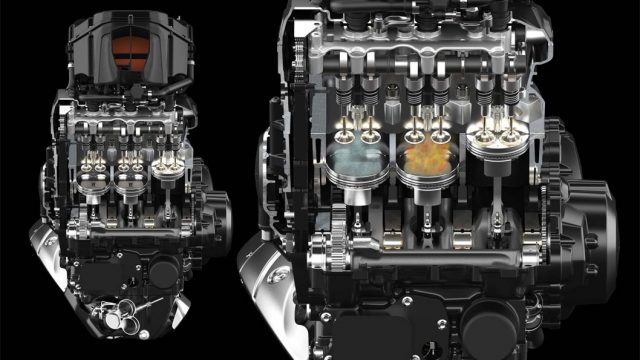 It’s almost official. The MotoGP middle-class is to be powered by the Triumph Street Triple engine. The British manufacturer signed a deal at the beginning of this year with Dorna Sports to become de official engine provider for Moto2. Starting with 2019 Honda gets out of the Moto2 picture.

As we all know the Moto2 class has only one engine choice available and since the 2011 switch , when the 250 two stroke class went to four-stroke, Honda supplied the competition with power units. The famous CBR600RR in-line four equipped all the Moto2 machines until now, but with Honda giving up the production of their junior sports bike due to the lack of interest the supply deal finishes at the end of the 2018 season.

The Moto2 regulation allows only one engine producer and with Honda out, there was need for a new supplier. Lots of speculation arose regarding who will come next. The only options available were from Kawasaki, MV Agusta and Triumph, with the last one as a favourite.

There will be a great advantage for the Triumph’s triple. The company is currently working at developing a bigger 750 cc in-line three cylinder engine. Even with bigger bore the whole unit is narrower than the Honda’s 600cc. This change translates into a more nimble and lighter bike for 2019 engine.

Triumph is to deliver 200 engines at the starting of the season and provides a renewal at every three races. The quality must be guaranteed and the support must come for every team starting with the preliminary testing in 2018.