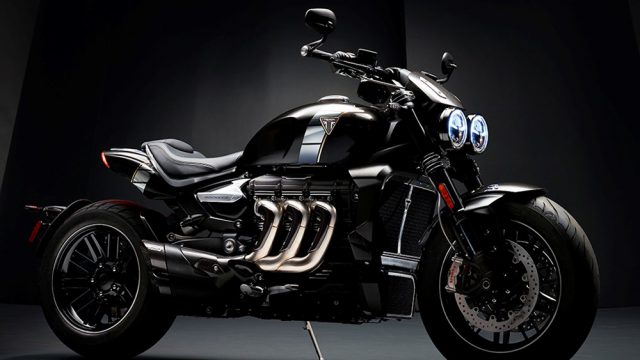 The power cruiser world is about to be rocked. Check out the first photos of the new Rocket

Triumph is dead serious about the new Triumph Rocket III. The company just presented an all-all-new Rocket TFC that features a 2.5-litre three-cylinder engine and it produces over 180hp. The looks are just like the spy-shots we’ve seen before, but the details will make you droll for a closer glimpse.

The Rocket TFC is part of a new division of customised bikes built by Triumph in limited series. TFC stands for Triumph Factory Custom and brings only the best parts the company can put together. The second TFC model presented by Triumph together with the Rocket is a Thruxton R model that features an abundance of high-end parts and a lot of carbon fibre.

The highlights of the Rocket TFC are the all-new frame, engine and single-sided swingarm. The numbers are not official yet but we know the engine is raised to 2500 cc and the torque produced is closer to 230 Nm. The old Rocket was nothing compared to the performance and looks of the new model.

A whole new Rocket range will be presented as we learned today. Triumph promises to bring to light another variation of the model on May 1. A thing is for sure as the British manufacturer widen up the Modern Classics range, the history might repeat for the Rocket. The platform presented today can handle a cruiser, bobber, and even racer looks with some simple modifications.

The Rocket TFC features already all modern electronics available and the TFT Connectivity system. We were glad to see that the bike is not a solo seater against any rumours and we are more than sure that this year we will get to ride this beast.