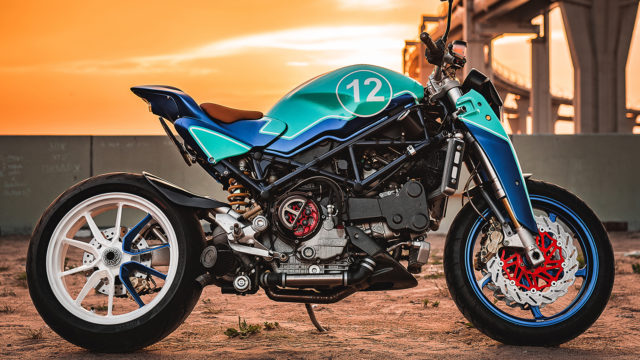 Balamutti is a custom motorcycle workshop based in Saint Petersburg, Russia and the man behind this turbocharged Ducati Monster S4R is Vitaliy Selyukov. The motorcycle features a couple of tweaks like a Garrett GT35 turbo, custom Tex Design bodywork kit and upgraded breaks.

Some of you may have never heard of Vitaliy Selyukov of Balamutti, but Strontium, the custom Ducati Monster that you see in the photos, is not the first wild motorcycle that he built. He races a three-wheeled Ducati Hypermotard on the ice, so adding a turbocharger to a naked motorcycle is not a hard task for the custom motorcycle builder.

The Ducati Monster S4R 130 hp L-Twin engine featuring four-valve per cylinder, water-cooling and an oil cooler as well, was the perfect engine for Selyukov to use forced induction. It wasn’t easy to design the whole layout as it took almost a year to design and manufacture the necessary components for the turbocharged engine. The motorcycle’s power delivery boosted thanks to the Garrett GT35 turbo, but unfortunately, there are no details regarding the power figures. Vitaliy Selyukov focused on fine-tuning the L-Twin to keep the combustion controllable by not over spinning the turbine housing. The new engine features custom components such as a new intake manifold with the appropriate internal capacity and a modified Magnetti Marelli ECU. Of course, a new exhaust manifold was needed to make sure the engine works and sounds properly.

To make the Ducati Monster look even cooler, Selyukov was helped by Italian automotive designer Paolo Tesio of Tex Design. Thus, a new bodywork kit was shipped. In order for the turbocharged engine to be fitted on the motorcycle, Selyukov had to make some changes to allow more room for the turbo as well as tailoring the design to his liking.

A couple of details that set the bike apart are the fork guards and the shortened tail which give the Ducati Monster S4R a more muscular appearance. Other design components include a small carbon blade front fender, carbon fibre belly pan and rear plate holder. A custom leather seat completes the package while the paint scheme was made by Anton of Octopus Art Aerografia.

Suspension wise, the Showa fork and monoshock are fully adjustable. The braking system was tweaked featuring bigger discs and modified calipers. A more powerful master cylinder was fitted on the handlebars while the clutch system was improved as well.

The Balamutti turbocharged Ducati Monster S4R is quite an awesome project and it keeps you wondering how deep your pockets need to be for such a custom motorcycle. But, there are no details regarding that matter.