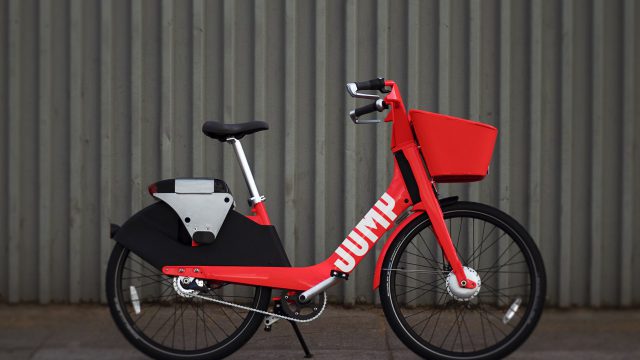 Ride sharing giant Uber makes the first bold move under the new boss Dara Khosrowshahi, acquiring e-bike sharing business Jump Bikes. The new business direction has been integrated so quickly that e-bike sharing is already present in the Uber App in the areas where it’s available.

Reportedly “assimilated” for $100 million, Jump Bikes has built their electric bicycle business without station docks. Their e-bikes come with a hook that allows riders to simply secure them to existing bike racks in cities and other things used by cyclists to tie their bikes to. This also contributes to producing less #bikelitter, as a Jump Bikes official hashtag describes what is left over at docking stations.

So far, Uber’s new “toys” are available in San Francisco and Washington DC, with around 250 bikes. One of the coolest things about this entire story is that Uber is offering a flat rate to their customers, set this year for $2 a ride, estimated to be shorter than 30 minutes.

We checked Jump’s website and also found that they run a subscription program dedicated to those who feel they need more e-biking for their daily schedule. That is, a “$5 signup fee for the first year which includes 60 minutes of ride time per day and just $.07/minute for anything beyond 60 minutes. Additionally, these guys get a $25 Out-of-System Parking Fee and $5/month during the second year as a member”, Jump Bikes says.

On the tech side, Jump’s bikes look neat enough to turn heads, especially with their clean and sleek design, hidden cables and brake wires that prevent tampering. They are equipped with a 250W Class 1 motor that can add a speed boost up to 32 km/h (20 mph). The batteries will last for around 64 km (40 miles), but charging at home or office should eliminate most inconveniencies.

Electric bicycles, shared or not, already proved to be a great way to reduce traffic clutter and pollution, while reducing time spent commuting, so the next question that comes is whether Uber is considering adding electric scooters or motorcycles to their line-up.

Such a move would require a solid investment, but since we’re talking “green and eco,” various tax exempts and discounts should also be in this game, making this idea so much more than a dream. After all, why shouldn’t Uber jump in the electric two-wheeler market, after all? Especially with exclusion zones for ICE cars starting to spread around many European capitals and major cities, it doesn’t take a marketing PhD to spot lucrative opportunities.