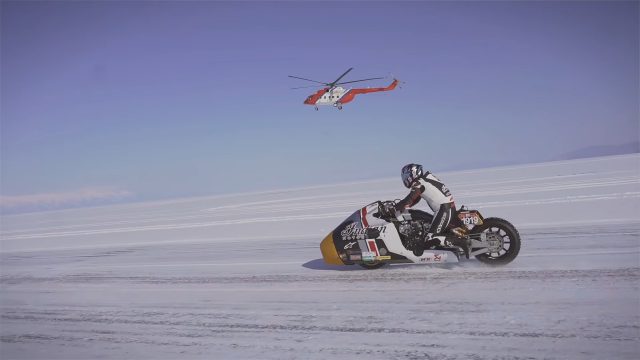 The Indian Appaloosa v2.0 competed at the Baikal Mile Ice Speed Festival. It’s an event held at Lake Baikal, Russia. The weather conditions are extreme and reach between -25 and -30 degrees Celsius during the night.

The goal is to race as fast as possible on the frozen surface of one of the deepest lakes in the world, Lake Baikal. That’s not an easy job considering the extreme racing conditions.

The Indian Appaloosa v2.0 features a liquid-cooled 1,133cc V-Twin engine making 150 hp. The bike was fitted with a new nose fairing, improved components, spiked tyres and a new paint scheme. To keep its grip on the ice surface the Appaloosa was equipped with custom made Dunlop SportSmart Mk3 spiked tires. Also, it features a Nitrous Express performance kit. The custom project was built by Indian in collaboration with Workhorse Speed Shop.

The event organizers provided helicopter and tank assistance for the racers.

“Racing on ice is hard, this is the most incredible thing I’ve tried to do. Coming here was a huge adventure for all of us and it was all about challenging ourselves, making new friends and having fun at the same time,” said Brice Hennebert, Appaloosa Creator.

“At this event there are bikes, you’ve got cars, a helicopter, a tank with a Bentley body. I mean, the craziness of the machines is just at the top level,” added Sébastien Lorentz, Appaloosa v2.0 Rider.

The Indian Appaloosa v2.0 had some technical issues with the engine management. The engineers tried to reset the whole system to compete in all races. After that, the front tire broke. Taking into consideration all these issues, the team managed to race in all races.