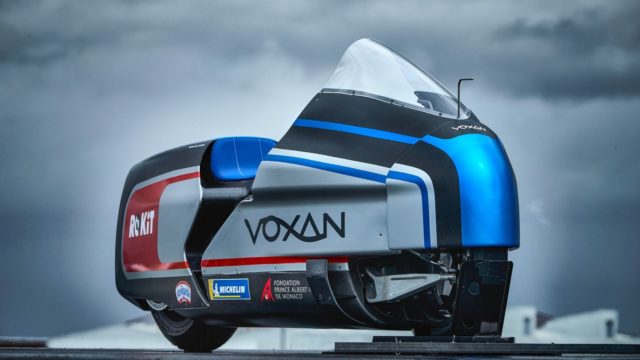 Voxan Motors just pulled the covers off their World Speed Record motorcycle, namely the High-Performance Wattman Electric Motorcycle. It has a power unit delivering 367 hp (270kW) which can take the electric motorcycle to a top speed of 206.25 mph (330 kph). This Wattman was designed to break the World Speed Record and it’ll be ridden by no other than former MotoGP World Champion Max Biaggi.

The Voxan High-Performance Wattman Electric Motorcycle was designed in partnership with carmaker Venturi (which owns Voxan Motors) at their Monaco factory. It’s developed to set a new world speed record in July 2021. The venue will be the Salar de Uyuni in Bolivia which are considered to be the world’s largest salt flats.

The electric motorcycle is fitted with a power unit making 367 hp (270kW) and the top speed is set around 206.25 mph (330 kph), the latter being the mark Voxan attempt to break to set a new World Speed Record. Here’s the press release:

The Wattman is the first high-performance electric motorcycle made by Voxan, specially designed for our latest world speed record project. In July 2021, the Voxan Wattman will attempt to set a new world speed record on the Salar de Uyuni salt flat in Bolivia. Riding this exceptional machine will be six-time motorcycle racing world champion Max Biaggi.

Voxan Motors, part of the Venturi Group, is proud to be partnered by global telecommunications innovator ROKiT Group. No strangers to speed and the power of electric mobility, the ROKiT Group are also title partners of Venturi’s Formula E Team, ROKiT Venturi Racing.

Commenting on the partnership, ROKiT Group Founder, Jonathan Kendrick, said: “When Venturi President Gildo Pastor showed us the Voxan Wattman and talked me through the world speed record attempt we were very impressed by his vision, ambition and the commitment of his team in creating the technology involved. To have our ROKiT red livery on such a unique piece of electric engineering reflects our ethos as a group of companies and is a real honour. Gildo is a true pioneer and we are delighted to partner with him and Voxan Motors on what we hope will be a highly successful and ground-breaking record attempt.”