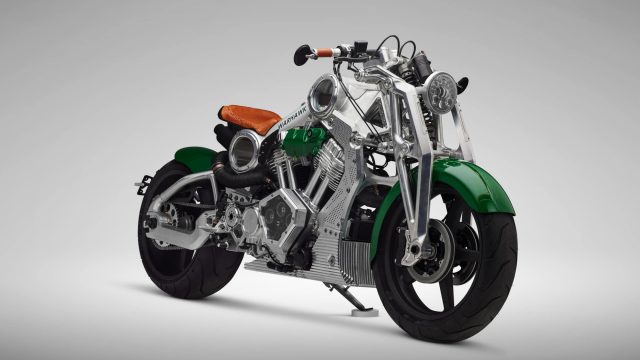 Warhawk is the bike that revived Curtiss motorcycles, but also the last petrol one they make prior to focusing on electric roadsters only. 36 units available at supercar prices

We reported earlier that Curtiss Motorcycles was heading for an all-electric future, with all their efforts now channeled towards delivering some of the most radical e-roadsters the industry has seen to date. As their Zeus model represents the first in what we hope will become an entire line of electric motorbikes, we felt it was only natural to show you their last petrol-powered machine, the Warhawk.

Warhawk surely reminds you of other outrageous bikes that used to be sold under the Confederate badge, and that’s because Curtiss is the new Confederate. There are multiple similarities between the two designs, and Curtiss say that they will help make the transition easier. Warhawk is the first machine to display the Curtiss logo in 105 years, and it is indeed a milestone, as it represents the rebirth of the old brand and the end of the petrol era for this manufacturer, too.

Curtiss Warhawk has a beastly engine, a 2,163cc V-twin that can produce 150 HP @ 5,100 revs and a peak torque of 217 Nm @ only 2,000 revs. Its crankshaft is a one-piece forged unit with toothed belt camshaft drive. Fuel injection electronics come from Delphi and the throttle body is supplied by S&S. The transmission is an Andrews 5-speed box with a hydraulic Bandit multiplate dry clutch.

The chassis of the Warhawk is a machined modular monocoque structure made of aluminium, with a 7” (17.8cm) tubular backbone that also serves as a 3.75 gal (16.2 liters) fuel tank with the signature Confederate glass panels. The parallelogram fork is equipped with a race-proven Racetech monoshock, fully adjustable for low and high speed compression, rebound and damping, complemented by a cantilever aluminium swingarm loaded with a Racetech monoshock in the rear.

Only 36 Warhawks will be manufactured, each costing as much as a decent supercar. Even at $105,000 a pop, we guess that collectors will fight to secure one before they can be found in auctions only, with even higher prices.