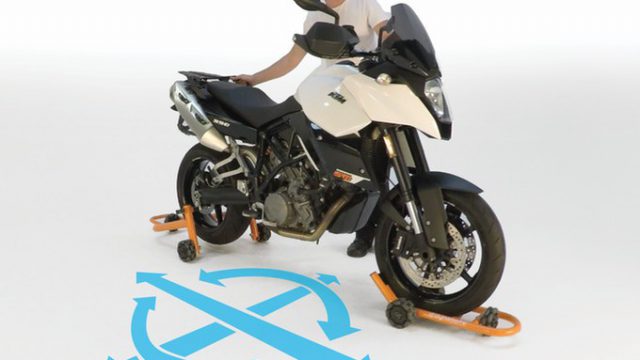 You can even dance with your motorcycle in the garage

What’s so special about these motorcycle stands? They come with 125 mm multi-directional wheels that provide a full 360-degree mobility while maintaining a fixed orientation. The big wheels make traversing floor imperfections easier than smaller wheels.

The front stand is universal, while the rear stand comes in two versions – a version for those bikes that have conventional swingarm and another one for those bikes with a single-sided swingarm. The latter comes with a hollow rear axle.

As an additional feature, the manufacturer offers a safety bar preventing the stand from unloading.

The dynamoto project originally appeared on kickstarter back in 2015 and was created by two Australian motorcycle riders. They had in mind a storage system that made the act of parking, moving and storing a bike easier. A stand set (front and rear) costs $620 (U.S. Dollars) and can be ordered online. A conventional stand set is about $150, but it can go up to $390, depending on the brand.