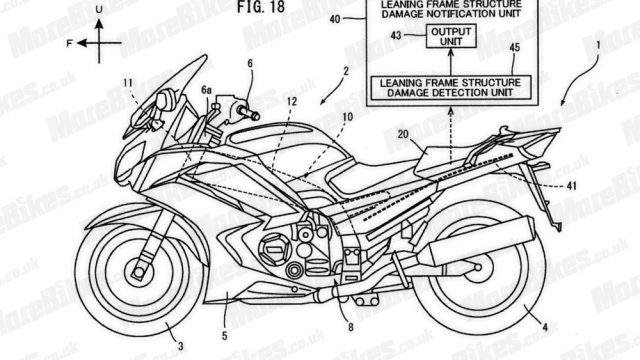 Yamaha’s working on a new chassis technology, according to MoreBikes, which features a carbon fibre frame that bruises when it’s damaged. The name of the patent is Leaning Vehicle and the document includes 29 pages describing how it works.

Yamaha plans to develop this tech for the frame and sub-frame to reduce weight and strengthen the bike chassis.

The technology used detects damages on the leaning frame structure with the help of an electric cable fitted in the frame. This cable is sensitive to any form of impact and when it’s slightly damaged the system sends an alert to a Damage Detection Control Unit (DDCU).

Thus, the DCCU can notify the rider that the frame is damaged. This technology can be upgraded to use a fibre-optic version to detect chassis differences between the mainframe and the subframe.

Thanks to the material used in the frame construction, when the chassis has any damages, the colour of the damaged part changes notifying the rider where the frame has any issues.

Furthermore, the frame is painted with a colour that emits light in areas the chassis damaged. This helps the rider to see where the frame was damaged.

As the documents show, there are a couple of obstacles to tackle due to the lack of frame flexibility and cracks that may appear. The material used to build the leaning frame structure is fibre-reinforced resin and the patent describes how a crack on the inner part of the frame my occur due to an impact such as dropping the bike from a standstill. Other impact damages that may appear are dents or splits in the frame structure.

It might take some time for this chassis tech to be fully developed and introduced to production models, but we’re looking forward to seeing what Yamaha has in store for us.