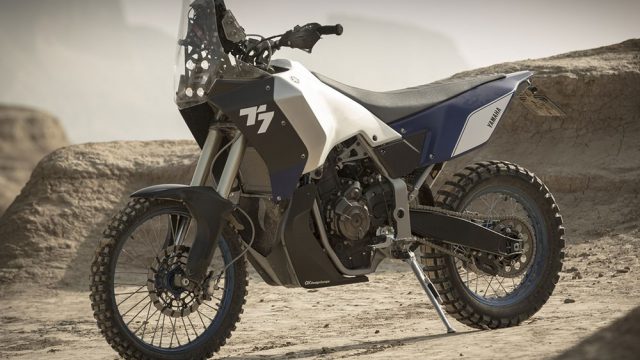 Yamaha T7 Tenere previews Yamaha’s replacement for the old XTZ 660 Tenere. It should hit the market as a series model in 2018, and the judging by the concept it’s going to be a player in the middleweight adventure class.

Yamaha might do the same thing in the middleweight adventure category as Honda did last year when revealing the new Africa Twin. Yamaha is bringing up to life a big name in the adventure world: the Tenere.

The trick is that this middleweight bike could be lighter than today’s middleweight adventure bikes. Some people say it will weight around 180 kg. We don’t have the details yet.

Looking at the concept, we notice the Dakar-inspired fairings, the 21 front, and the rally seat. Of course, this one is just a nice-looking concept. But it seems to be a very promising one.