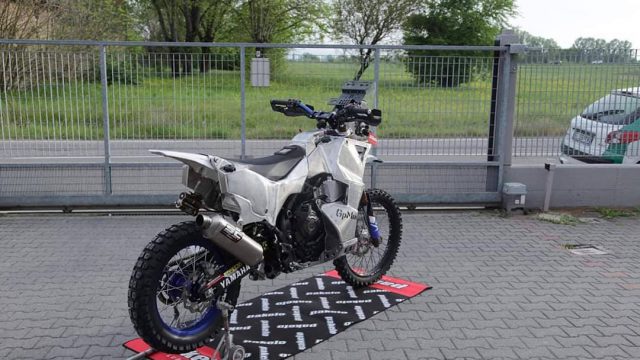 This bike was designed by Gian Paolo Mucci for the Kapriony Team. Its named Yamaha T7 Rally and it’s a rally raid bike with one purpose in mind – racing.

Mucci is known for customizing Honda Africa Twin models and enhance their offroad performance. In order to raise those standards, he used a Yamaha Tenere 700 as a base model to create a rally raid focused machine for the Kapriony Team according to Rocket Garage. The team used to race V-Twin adventure motorcycles for the last six years, KTM 990 Adventure models to be more precise. So, they needed a new approach. Enter the T7 Rally bike.

It features a redesigned steering plate and an upgraded suspension – air-cooled WP fork with 300mm of travel and on the rear a Mupo system modified by Air Tender. Moreover, the upper plate is gull-winged and allows the removal of the 30mm fork to distort the attitude of the bike on sand tracks.

The exhaust system is provided by SC-Project which increased the power output with 8hp. To save weight, the Italian craftsmen removed everything that was useless, to keep the weight within the wheel axles. The iron subframe was cut and Mucci built an aluminium box frame that weighs less than half of the original components and it was designed to fit the fuel tanks behind. To balance the weight, the fuel was placed 50 cm lower than the production bike.

To increase stability, the rear bodywork ends 15 cm before the wheel axle to avoid any wobbles at high speed. Moreover, the fuel tank capacity was increased to 35-litres. The riding position was redesigned and now the rider can position himself forward by about 15 cm. With all these upgrades, the overall weight saving compared to the standard bike is 20 kg.

A particularity is that with two sockets the rider can unscrew eight bolts and remove the bike’s fairings which is a useful feature in Rally Raid competitions. Furthermore, it’s easy to clean the air filter by removing the filter cover.

The Yamaha T7 Rally still lacks a paint scheme, but we think that Paolo Mucci and the Kapriony Team will find some awesome racing colours.