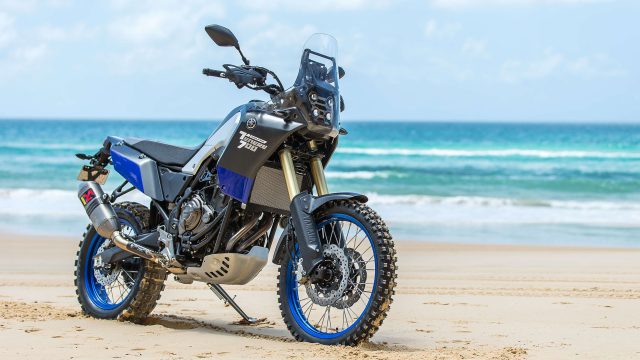 Yamaha has made public the route for the multi-continent advertising tour for their upcoming Tenere 700 World Raid middleweight adventure machine. The plans look pretty final, but they unfortunately don’t seem to include the US or any portion of North America. However, fans all over the world can follow the high-paced action on a dedicated website.

Initially surfaced in its first prototype trim back in 2016 under the codename T7, Iwata’s upcoming machine is expected to make appearance in its commercial version this fall, most likely at EICMA in Milan, Italy.

The Tenere 700 carries on one of the most successful stories in Yamaha’s history and represents a new generation of Tenere machines that aim at least as high as the old ones. The new bike is powered by the proven MT-07 fuel injected 689cc parallel twin lump mated to a revised 6-speed transmission. The frame is, of course, entirely reworked, and we have gotten wind that the seat height was lowered compared to the initial prototype.

Yamaha asked world-famous exhaust makers Akrapovic to design a new can for the Tenere 700 World Raid, blending in the performance-oriented engineering with the sweet tonal presence of true off-road sport machines. Also, the Tenere 700 got an aluminium fuel tank and carbon fiber panels for extreme sturdiness and light weight.

Cue a dedicated, rally-raid-inspired dash that resembles a roadbook unit, quadruple LED lights and a clear screen, strong bash plates and top-drawer suspensions for high-level performance both on and off the road, in almost any scenario adventure riding might put you in.

Yamaha’s selected riders will take the Tenere 700 World Raid on a trip that covers 4450 km (2765 miles) in Australia, Africa, South America and finally, Europe. The route comprises the most various and challenging terrain types, from the Oz beaches to the unforgiving Merzouga desert trails to the heights of the Andes and twisty roads in Italian Alps.

You can follow the adventures of the Tenere 700 World Raid tour heading over to the dedicated website www.world-raid.com.