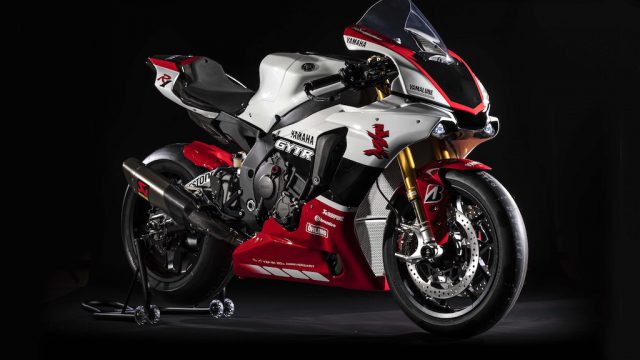 This is the most expensive Yamaha R1. And it’s not just a new color scheme

For the 20th YZF-R1 anniversary the folks at Yamaha and their endurance-wining team GYTR put together a one of a kind R1. We are not talking about a new paint scheme. The YZF-R1 GYTR will be a track machine complemented with everything that you can think of for your track bike. Only 20 units will be available worldwide so, you better send your deposit as soon as possible.

The GYTR (Genuine Yamaha Technology Racing) is the official Yamaha team that runs in the World Endurance Championship. Why is this team so special? Because they've managed to get their fourth victory at the 8-Hour Suzuka endurance race this year. So, what other places to prove your the best superbike builder other than Japan.

To get a better idea about why you have to pay €39,500, check out the list of special parts that will come with the bike. The exhaust system is an Akrapovic EVO2 titanium full racing line, the entire braking system is from Brembo and the suspension are a set of race-spec Ohlins. You also get a set of carbon fibre fairings and a set of Bridgestone slicks for your first track day.

Besides the top-spec parts, the bike comes with a plate on the top yoke engraved with the unit number, a certificate of authenticity, racing butons, raing rear sets, clip-ons and even a remote front brake adjuster. There’s also a considerable weight loss and a better throttle response due to the lack of street-legal fairings and Euro4 exhaust system.

The whole 20 units of the new YZF-R1 GYTR will be put together by the same crew that takes care of the EWC bikes. Taking everything bit by bit if you chose to build this bike by yourself, you will get pretty close to the same amount of cash. Considering that the GYTR expertise is priceless, I personally would go for their version of the R1 track bike if having the money.

If the colour or the price is a bit too spicy for you, there's always the stock version of a Yamaha YZF-R1 that sells for $16,699 and still has some grunt for racing.