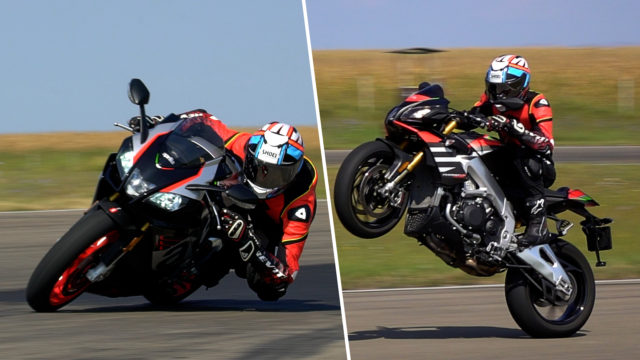 Both of them have the same price – at least in our market. The Aprilia Tuono costs 17.200 euros, while the RSV4RR is 17.000. So, if having the money, which one would you buy? This is just one of the answers we wanted to get from this review. More than that, we wanted to push the Tuono to the limits on the track, and to get a first ride with the RSV4RR.

The Aprilia Tuono V4 is one of the best supernaked motorcycles on the market. It’s already a classic, with its 1,100 cc V4 engine, now capable of 175 horsepower. We already had a ride with this Tuono on street and it was fantastic. Now it’s time to put it on track.

But the Aprilia RSV4 RR is a first for us. It has the same engine but tuned for racing and a bit smaller – 1,000 cc. Still, it develops 201 hp, so it meets the current standard in superbikes. How does it ride on track? And which are the first things we’d modify if racing this bike?