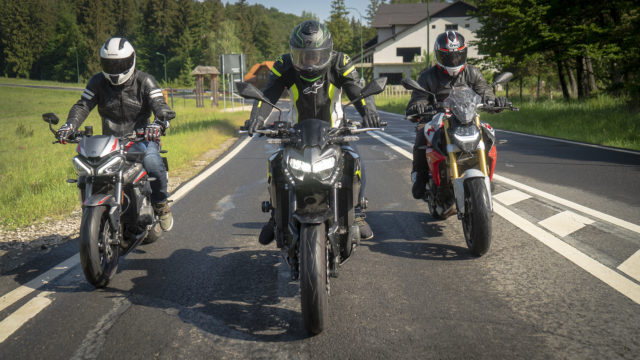 We got three of the hottest naked bikes around in a head-to-head comparison: Kawasaki Z900, Triumph Street Triple RS, BMW F900R. All of them are new for 2020, and all of them ride pretty good.

Kawasaki Z900 – the same thrilling inline-four engine, but tamed a bit by the riding modes and traction control. This is the biggest improvement for the Z900. The lights are LED right now, and the TFT dash looks much better than the old one.

BMW F900R – not just a facelift, this is an all-new bike for 2020. New engine, derived from the 850 cc unit of the F850GS, new looks, new suspension with Dynamic ESA, the whole array of BMW electronics. It has nothing to do with the old F800R.

Triumph Street Triple RS – Led headlight, new dash that can be paired with the smartphone, and distinctive look. But it’s not just about the look. The Street Triple RS features the 765 triple Moto 2 engine and top-spec components such as an Ohlins rear-shock, Brembo M50 calipers, premium fork. It looks like a proper track machine.