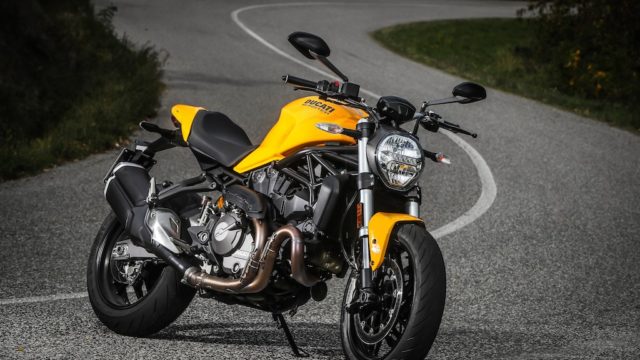 Review of the refreshed midsized Monster

The Monster 821 introduced in 2014 with its liquid-cooled Testastretta 11º motor, which for 2018 to mark the model’s 25th birthday has now been updated to be Euro 4 compliant, while also refreshed aesthetically in the tyre tracks of its bigger Monster 1200 sister, by adopting all the styling modifications that were incorporated in that when it was released in its current revamped form one year ago.

The debut of the revamped Monster 821 represents a roll of the dice for the Italian company’s management, who are counting on it remaining the best-selling model of any across their entire six-platform lineup (Panigale, Diavel, Hypermotard, Supersport, Multistrada and Monster, in case you wondered – Scrambler is supposedly a separate brand).

The higher 810mm level of the two stock seat heights was just fine for me, whether cutting corners through Bologna rush hour traffic – and there is almost certainly no better traffic tool than this midi-Monster – or carving canyons up in the junior Apennine mountains, where it’s intuitive handling really showed up well thanks to the chassis packaging that makes it feel much lighter than it really is. At 181.5kg dry (206kg fully fuelled, ready to ride, carried via a pronounced 47.5/52.5% rearwards weight bias) this water-cooled bike is a good bit heavier than the 175kg air-cooled desmodue Monster 797, but it seems almost the reverse thanks to the way it changes direction so effortlessly and is so inviting to flick from side to side through a series of mountain bends.

The Ducati Safety Pack/DSP fitted as standard to the bike, incorporating three-level ABS and eight-stage traction control that are both switchable as well as capable of personalization. That’s if you prefer not to go with the default settings in any of the three separate RBW Riding Modes delivered by the Magneti Marelli ECU, which you can readily switch between while on the move just by closing the throttle before making your selection. The new midi-Monster has a much broader well-proven package of electronic rider aids than other bikes it’s competing against, and Ducati has been working with Marelli for so long to evolve the class-leading package that it’s well-nigh flawless for a real-world road bike like this one.

Fuelling is superb in all three riding modes, especially in Touring where the pickup from a closed throttle is flawlessly smooth, though in the more aggressive Sport mode it can be a little brusque, yet still controllable. This engine’s sweet spot is from 3,000-7,000 rpm, and although it’s happy to rev out all the way to the limiter when you’re really going for it, there’s not a lot of point in doing so because midrange grunt is so strong.

Reduced numbers notwithstanding, this is an extremely satisfying engine to ride, and I must say there is indeed a touch of 950 Multistrada syndrome here because in real-world everyday riding, this is arguably a more satisfying bike to ride than the 1200 Monster.

Thumbing the starter button on the Monster 821 was also the signal for a concert performance from the 2-1-2 exhaust of the kind I thought was gone forever on a Euro 4 compliant street-legal motorcycle because like its predecessor this has to be one of the best-sounding production V-twins in the marketplace today. It’s not excessively loud, just sufficiently so to be soulful and sensuous, with an old-school rumble at low rpm that transforms into a trademark twin-cylinder bark as revs mount. Magic. And that engine is also quick to gain revs, thanks to its muscular grunt from down low which is rather more than you expect from a middleweight motorcycle, but is one thing that makes the new Monster so ideal for use in town – in Touring mode, though! Another is the light action of the oil-bath slipper clutch which is a delight to use, far removed from the ultra-stiff Ducati dry clutches of yore, which left your hand frozen in pain after a sixty-minute rush hour workout.

The adoption of the 1200 Monster’s slimline (albeit smaller) fuel tank – complete with the same ski-clasp fixing clamp of 25 years ago – helps make the revamped 821’s riding position seem more spacious, as well as lighter-steering, even though the geometry is unchanged.

The all-new TFT dash is a great piece, easy to see, easy to work (in terms of swapping modes or TC and ABS settings), and super legible, too. For the first time on the Monster 821, there’s a gear selected reading prominently displayed to the right of the digital speed reading where it’s easy to pick out at a very quick glance. This dash is light years ahead of what Ducati used before on the 821, and very welcome.

The amount of heat radiating off the water-cooled V-twin engine at rest, especially on the right side, if you sit stationary waiting for the lights to change for more than a few seconds. This was noticeable even riding in two-piece leathers, and it’s sufficiently intense to make riding it in jeans or a business suit for any length of time potentially uncomfortable.

Ducati didn’t fit its DQS Quick Shift system offering clutchless gearchanges in either direction. That’s included as standard on several other current Ducati models, but this is the bike which arguably would most benefit from it, in spite of which it’s only available as a Euro 220 option