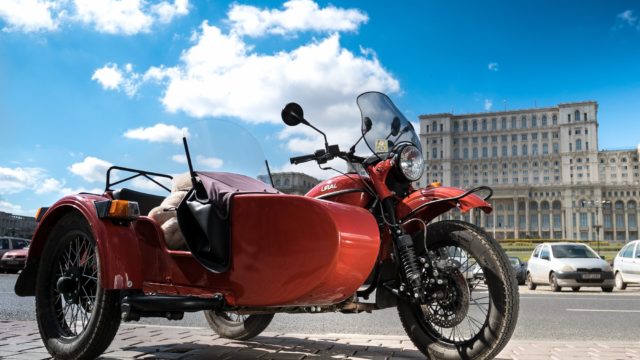 Ural is back on the market with the sidecar motorcycles. We were amazed at the amount of fun the sidecar brings.

This Soviet machinery is mainly appreciated by enthusiasts in search of adventure. It may be the only vehicle that attracts more attention than a Ferarri. Road addicts your prayers can end, from now on your dog can join the trip. Not fast, not fancy, not full of electronics, rough and reliable Russian engineering for you to enjoy.

The engine is a twin boxer, upgraded from 650 to 750cc, and now equipped with a fuel injection system. Is not that powerful, only 42 Hp, but enough to pull whole 320kg assembly and another 300kg additional. Is rather a low rpm engine, with more muscle than top speed, it leaves you the feeling that it can even tow a car when needed. Sounds great when idling, it seems you can count the turns. The throttle response feels right between 2500 and 3500 rpm, the cruising speed is at around 70 Mph.

The gearbox is different from any motorcycle. You hear a ‘BANG’ noise at every change. It has only four gears, a short first and second, but the greatest thing is the reverse. Yes, you’ve heard right, it has a reverse, and it helps a lot! It also comes with two-wheel drive. The braking system is also improved the Brembo calipers mounted by the Ural on the front and rear wheels have the power to stop you when fully loaded.

There is no ABS or traction control on this motorcycle. The only electronic system is the injection system, built with 2 computers, one for each cylinder.

Once you get used to the dynamics of the sidecar is a joy to ride. You have to understand at first the wobbles and don’t get scared when noises appear. Going on two wheels or rolling burnouts are the amusement that only this type of motorcycle offers. The Ural will put a big smile on your face.

Riding position seems similar to the one you have on a cruising bike. You don’t have to put your feet down when stopped, this is a big plus.

The handlebar is easy to reach, and get this, the rider seat has a rubber cushion that you can adjust for maximum comfort. The sidecar has a windshield for the passenger and large dimensions trunk behind the seat.

You can add almost everything you may think about, from a spare wheel to a trailer for your extra luggage. The great part about Russian machinery is the multipurpose design. If you want a headlight protection grid, you can also use it for cooking as a barbecue. It’s almost like a motorhome, a bit more exposed.

Full metal body, robust and classic looking motorcycle, with everything in your near reach. The dash has a simple round speedometer and the usual markers around it. Very little use of plastic on this bike. Nuts and bolts are common zinc ones that you can easily find at the store.

You may get the feeling of an indestructible war machine remake from the 40’ timezone,

It comes in seven models, a couple of them with two-wheel drive.

You may say the sidecar motorcycles handle like an ATV but only regarding the steering. The sidecar raises some riding issues. It turns only by using the handlebar. When you accelerate the third place remains behind and drags you to the right. When you brake, both engine or rear brake the assembly will make a left. Overall the Ural has the same controls as a regular motorcycle. As a tip, have a look from time to time at the sidecar because is out of your eyesight.

The reverse lever is easy to rich but most of the time is not working smoothly so you have to pull it firmly. The saddle has a classic shape but is not that comfortable. We tested a model that was equipped with a windshield otherwise the wind protection for the pilot is close to none.

Accessories: two seats for the motorcycle, spare wheel, extra headlights for the sidecar. There are lots of add-on for this kind of vehicles but the first thing you have to add is the windscreen.