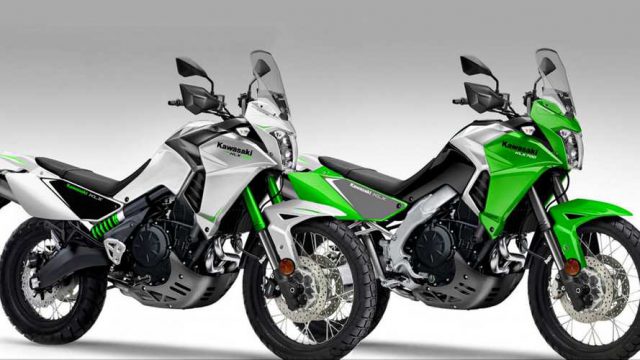 What about a 21-inch Kawasaki KLX 700 adventure middleweight?

Kawasaki is rumoured to be working on a 700cc adventure bike to fight against the Tenere 700. It could be named KLX, and, unlike the original, the engine might be a parallel twin instead of a single-cylinder. The bike should be a replacement for the KLR model according to OmniMoto and will use the name KLX which we saw in the early ’90s.

The Kawasaki KLX 700 could be fitted with a 649cc twin-cylinder engine from the Versys platform, maybe retuned for more low-end torque to suit the adventure-class standard and not a single-cylinder powerplant that the last KLX 650 model used. The Kawasaki Versys 650 has an engine making 69 hp while the Yamaha Tenere 700 is putting out 72 hp. So, the KLX 700 should feature an engine power of 70 hp. Now, it depends if the Japanese brand detunes the engine for more low-end torque designed for offroad use.

What about the weight? The Versys 650 has a curb mass of 217 kg and a fuel tank of 21 litres, and the Yamaha Tenere 700 wet weight is 204 kg and the fuel tank is 16 litres. The question remains on how the frame and engine will be built. For example, the Kawasaki Versys 650  has a tubular diamond, high-tensile steel frame and the engine is not a stressed member of the frame. So, for offroad use, the KLX 700 should be fitted with an engine that is a stressed member of the frame which should lower the wet weight to 207 kg making the motorcycle competitive with the rivals. The fuel tank should have 20 litres and this could mean the mileage exceeds 300 km. Other features might include a 21-inch front wheel.

On the US market, Kawasaki has the KLR 650 model which is not available in Europe due to pollution standards regulations. The KLX 700 might be the European model for the 650cc bike.

The competition on the middleweight adventure segment for the Kawasaki KLX 700, if they launch it, is the Yamaha Tenere 700, Suzuki V-Strom 650. On the more expensive side, it could be the KTM 790 Adventure and BMW F 850 GS.

14 thoughts on “Kawasaki KLX 700 Could Join the Adventure Game. Would You Buy It?”