The Italian brand has filed a patent for an active aerodynamic system for its future scooters according to FreePatentsOnline. The device uses winglets that rotate up and down to influence rotational torque. They look like they come from a MotoGP bike. It was accepted by the World Intellectual Property Office. This is their second patent regarding active aerodynamics as the first one was issued in Italy back in 2018.

The active aerodynamic package uses a last-generation MP3 three-wheeled scooter. The first patent of such a system was filed at the same time the Aprilia RS660 concept was presented at the 2018 EICMA show in Milan. Details of the RS660 concept suggested that it will feature an active aerodynamic system. So, it could come to motorcycles also as we’ve seen a similar winglets design fitted on the Aprilia RSV4 1100 Factory model. Furthermore, Piaggio kept quiet regarding details of Aprilia’s aerodynamics and as far as this technology goes, they don’t seem to be related because the patent shows active aerodynamics while the RSV4 1100 Factory only has winglets like the Aprilia RS-GP MotoGP bikes.

The patent on the MP3 scooter displays a pair of C-shaped winglets on the front fairing. This system features a movable top part of the winglets.which can rotate up and down just like the flaps on an aircraft's wings. They are electronically controlled with electric motors moving each winglet independently. Moreover, it has a pair of sensors incorporated into the scooter to receive the scooter’s speed and lean angle to adjust the winglets. Thus, the winglets position is switched as a response to the steering torque applied by the rider. 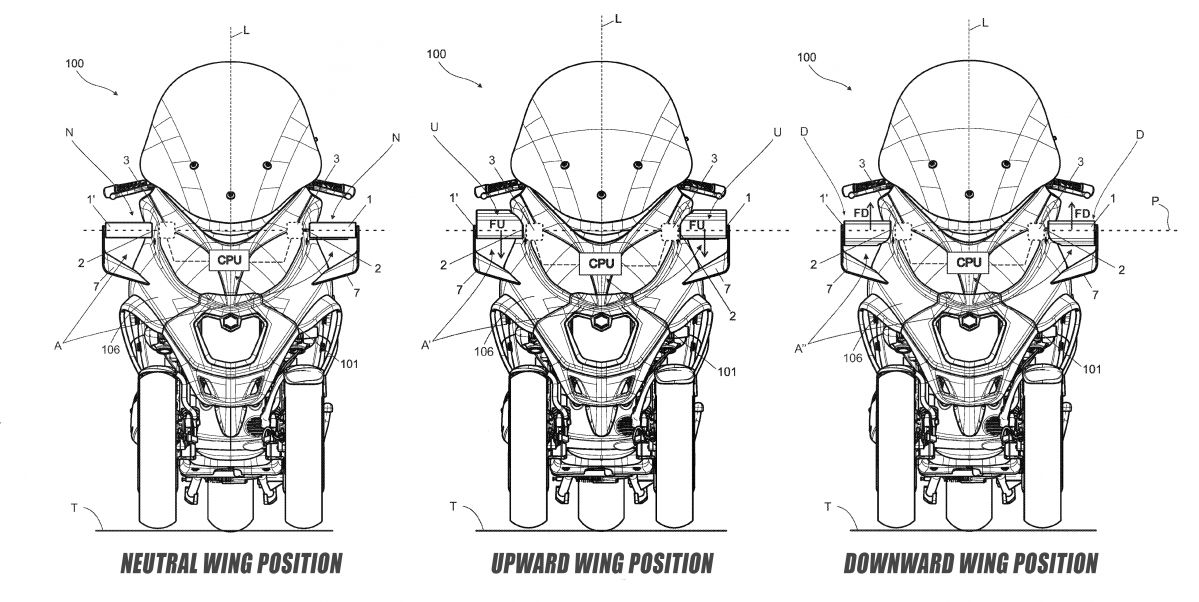 In other words, when one winglet is positioned upward and the other one downward, the active aerodynamic system provides a rolling torque to the upward winglet to increase corner entry and exit speed. The winglets work as well for moving in the same direction to generate more downforce on the front wheel and downward to lighten the weight on the front end. To feel any riding difference, the system works better at speeds above 50 kph (30 mph).

There are no details if this patent will ever be used on production scooters and if it does we’ll likely see it fitted on Aprilia models as the brand is under the ownership of Piaggio.