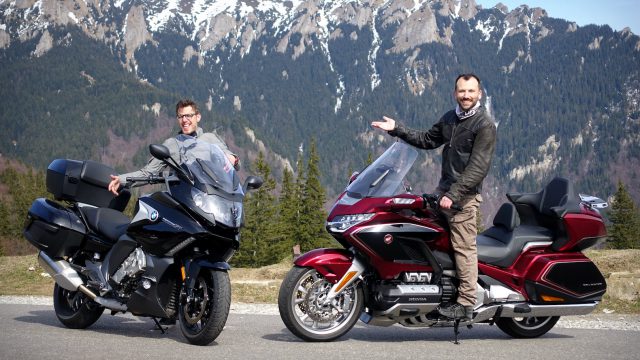 Two iconic motorcycles – the new Honda Gold Wing Tour DCT and the BMW K1600 GT. Two of the most expensive and comfortable bikes on the market. And it’s not just about the specs – these bikes come with a lot of character and gathered lots of aficionados.

The new Honda Gold Wing was revealed as a 2018 model and is a whole new bike – smaller, lighter, with a double-wishbone suspension instead of a traditional fork, with a reworked flat-six engine and featuring the unique DCT gearbox and lot of tech. The BMW K1600GT on the other hand, although it has been on the market for some time now, it’s still an impressive machine. It features a straight-six engine developing 160 hp and the same torque as the Honda, not to mention lots of riding technologies, a large storage space and extra comfort.

We had a tough job choosing a winner, because these bikes are different. In this special episode we’re riding to Sighisoara – a small medieval fortified city, which is considered to be the most beautiful and well-preserved inhabited citadel in Europe with authentic medieval architecture.

Watch our special episode below or