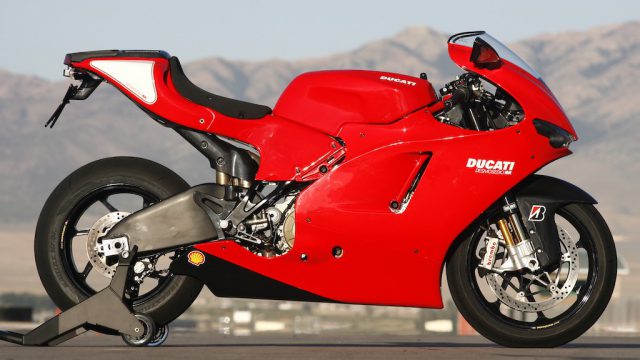 One of the most exclusive road bikes ever built

Ducati’s streetlegal MotoGP racer, the Desmosedici RR, stunned the motorcycle world on its unveiling at the Italian GP at Mugello on June 2nd, 2006, when Ducati announced it would go on sale exclusively via the Web. Originally costing Euro 55,000 or GBP 37,000 ($72,500 in the USA, at the time), the price of the fastest and most exotic series-production streetbike so far ever made by any manufacturer was raised to Euro 60,000 or GBP 40,000 in February 2007, when the initial decision to limit production to just 300 bikes was lifted to a final 1,500-bike ceiling, in response to the massive worldwide demand – far more than Ducati management had ever expected, or probably even secretly hoped for.

Other storie for you: R1200GS Off-Road Adventure in Transylvania

The Hayabusa is back. Ninja H2R Killer?

The price included a three-year warranty and all service costs during that time, a special bike cover plus wheelstands front and rear, plus a racekit exhaust system complete with ECU mapping to suit. Production began in December 2007, and was completed a year later on December 2nd, 2008, when the last of the 1,500 customer bikes was completed.

The Desmosedici RR featured advanced technology directly derived from the Ducati GP6 being raced in the 2006 MotoGP World Championship at the time it was created. Its 90º V4 engine accurately copied that used in the MotoGP bike, with its 86 x 42.56 mm dimensions for a capacity of 989cc, sand-cast aluminium crankcases and cylinder heads, magnesium engine covers, titanium conrods mounted on a re-phased crankshaft employing an asymmetrical Twin Pulse configuration, titanium valves gear-driven up the right side of the engine, thus guaranteeing precise valve control up to the highest revs in combination with Ducati’s trademark desmodromic distribution, 50mm Magneti Marelli throttle bodies with 12-hole microjet top-mounted injectors, and sophisticated engine management delivered by a Magneti Marelli 5SM ECU, and high-speed CAN line electronics.

This masterpiece of precision engineering delivered 200bhp at the crank in fully streetlegal Euro 3-compliant guise, was redlined way early at 14,200rpm, and employed a six-speed racing-style cassette transmission and hydraulically-operated dry clutch, to put the power to the ground via the rear 16-inch Bridgestone tyre, matched to a 17-inch front carrying Brembo Monobloc radial brakes.

The 4-2-1 exhaust with catalytic converter employed a vertical exit silencer hidden in the tail cover, and the engine was mounted in a version of Ducati’s traditional ALS450 chrome-moly tubular-steel trellis spaceframe, with a carbon fibre subframe supporting the seat, and an extra-long, cast, forged and pressed aluminium swingarm pivoting in the crankcases. GP-style Öhlins FG353 TIN-coated 43mm forks were fitted up front, while the rear suspension layout was the same as on the GP6, with the rear Öhlins shock mounted above the swingarm and pivoting on a rocker hinged to the crankcases.

All chassis and steering geometry was identical to the MotoGP racer’s, on a streetbike scaling a light 171kg/377lb, clad in carbon fibre bodywork identical to the GP6’s aerodynamics package designed by ex-Formula 1 engineer Alan Jenkins, save for the inclusion of twin headlights and street equipment. By contrast, Ducati’s top of the line 999R V-twin streetbike, which provided the basis for Troy Bayliss to win the World Superbike championship in 2006, the year of the Desmosedici RR’s launch, weighed in at ten kilos more – with half as many cylinders!