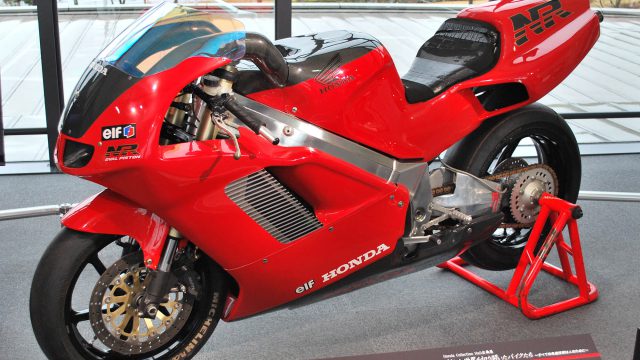 Our fourth motorcycle in the list is the LEGENDARY 1992 HONDA NR750. Why do we consider this motorcycle legendary? Let's say that the V4 engine that equips this piece of art, has behavioral disorders regarding the number of pistons, and this is why we include it in our Five motorcycles that shook the world list.

Back in 1992, Honda stunned the world with a revolutionary superbike: the legendary NR750 or RC40. What is unique about this road-going superbike? Well, besides the complete carbon-fiber bodywork, featuring a new look compared to the other motorcycles of the era, with its one-piece body cowling – tank, seat, and tail, the engine was the main star that captured the attention of the world's media. The engine is a V-Four, with eight connecting rods. What do you mean by EIGHT connecting rods? Well, the pistons are not round. It has four OVAL ones that are linked to two connecting rods each, eight valves, two spark plugs and twin fuel injectors per cylinder. It is a V8 engine under the skin of a V4.

The pistons are mainly like two regular ones but forged together in an oval shape. It was the first time when Honda used oval cylinders on a production motorcycle. It was (and still is) a crazy idea. Each piston is fed with gasoline by the twin injectors, controlled by the PGM-FI fuel injection system – (PGM-FI or Programmed Fuel Injection is the name given by Honda to a digital electronic fuel injection system for internal combustion engines).

The power output of the 90 degrees V4 oval piston, DOHC engine, was estimated at 125hp, delivered at an incredible 14.000 RPM, helping the bike to reach a top speed of 160 mph. The horsepower per-liter-ratio is similar to the current CBR1000RR. The gearbox is a six-speed one, served by a hydraulic, multi-plate, wet clutch system.

On such an engine, also a great exhaust system should be used, right? The exhaust system itself it's a masterpiece of flow engineering. The system configuration looks like this: 8-into-4-into-2-into-1-into-2. Sounds complicated? Well, that's because it is. From each cylinder, two exhaust headers are joining with the other exhaust headers from the other cylinders into four, then into two, then into one, then finally, into two under-seat exhaust canisters. The under-seat exhaust system design was also copied by Ducati two years later on their 1994 Ducati 916. In fact, the overall design looks pretty similar.

For the front-end suspension, Honda engineers picked a fully adjustable 45mm SHOWA, inverted telescopic fork. The rear wheel is held in place by a single-sided swingarm. The rear shock is a Nitrogen, gas-filled damper with a reserve tank, that helps the rider to bring this beast to its limits. Stopping power is ensured by the massive dual 310mm front rotors with four-piston calipers. For the rear brake, a 220 mm rotor and a twin-piston caliper are used

The aluminum-alloy frame is a work of art, and along with the suspension, provides the best rider experience. The bodywork that engulfs the chassis is very impressive. A mixture of composite materials like carbon-fiber and fiberglass. The fuel tank, seat and seat cowl are a single part. Talking about exquisite materials, the windshield is titanium-coated, and the instrument cluster is nicely surrounded by a carbon-fiber trim. The instrument cluster is composed of five analog gauges and an electronic dash that are transmitting the essential info to the rider.

But, as you already know, high-tech engineering and top-notch materials are coming with a high price. Only eight were officially imported to the UK, and in 1992 they had a retail price of £38,000 which is over £60,000 in today's money. All in all, only 300 road-going NR750s were built, and at £38,000 it was the most expensive production bike of its day.

See other bikes from our Five motorcycles that shook the world list: