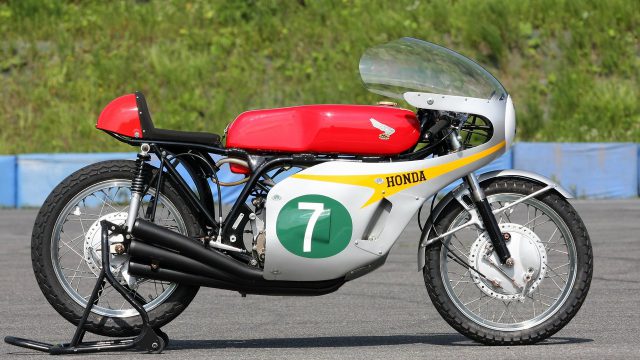 ‘It was so fast I could have won with one arm tied behind my back.’

Think about the word "perfection". Now try to imagine something that represents this word. What I imagine is a motorcycle built by Honda back in 1966. In today's article, we're going to talk about a race bike that was ridden by "Mike The Bike" Hailwood himself.

Back in the sixties, most of the competitors in the motorcycles racing scene were angry two-strokes. It was pretty hard to fight against a two stroker as the 1967 Suzuki's square-four RS67 that produced 42 bhp at 16,500 rpm and had a twelve-speed gearbox.

In 1966, Honda engineering crew, designed and built probably the most iconic racing motorcycle of all-time, not just for its technology but its racing success: Honda RC166.
Honda engineers somehow managed to squeeze six miniature pistons inside of a 250cc engine, along with other four cams, and 24 valves. The inline-six were spinning the crankshaft to 18,000 rpm and produced 65 bhp. The 7-speed gearbox was propelling it to more than 150 mph.

But why a four-stroke engine? Why six cylinders when a two-stroke engine was lighter and simpler? The answer comes from Soichiro Honda that had committed to four-stroke motorcycles for the street. He wasn't a fan of the two-strokes motorcycles because they were highly polluting motorbikes. To compete against the two-stroke motorcycles, Honda engineers needed to build an engine that would spin significantly faster than the competition. The thumb-sized pistons were linked to a crankshaft that was assembled from 13 individual pieces. Rotating the crankshaft to 18,000 rpm the engine required fuel that was fed to cylinders by six Keihin 22 mm carburetors and the 7-speed gearbox was assisted by a dry-clutch system.

In 1967 Honda increased the capacity to 297cc. This version was named RC174, which was produced to compete in the 350cc class. It was so successful it won seven out of the eight rounds in the hands of Mike Hailwood. He said that ‘It was so fast I could have won with one arm tied behind my back.’

After the 1967 season, Honda retreated from the motorcycle Grand Prix scene to focus on Formula 1.

Here are some of the specifications of this 250cc screamer: