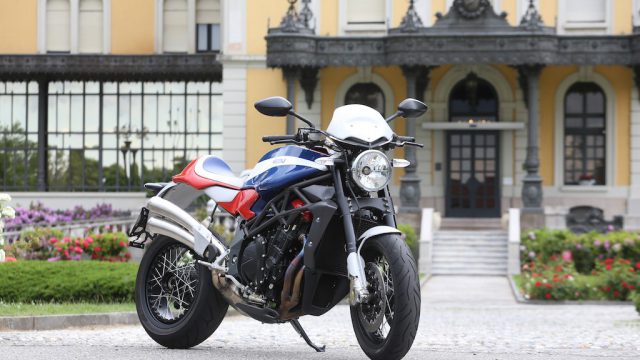 Back to the future – the Italian way!

It’s hard to think of any company more entitled to produce a retro version of a current MV Agusta model, than Moto Magni. Its founder, the late Arturo Magni who passed away in December 2015 at the age of 90, led the historic Italian trophy marque’s GP team, bankrolled by the profits of Count Agusta’s helicopter factory, to a remarkable haul of 75 road racing World Championships in 26 years. That includes winning no less than 28 Riders’ titles and the same number of Manufacturers’ crowns in the 500/350cc categories, with an array of three- and four-cylinder red-and-silver ‘fire engines’.

So besides Moto Magni’s dazzling new Filorosso model which pays tribute to MV’s three-cylinder history by using a current F3 800 engine as its basis, the company’s director Giovanni Magni, 59 and Arturo’s youngest son, has also gone back to the future in creating the Magni MV Agusta Storia (‘history’ in Italian). This classically striking four-cylinder Streetfighter can be built on the platform provided by any Brutale model from the original 750cc version which debuted in 2003, up to the current 1090 in its three different levels of tune and performance. The Storia is available either fully built up in the Magni factory north of Milan at Samarate, a stone’s throw from MV’s former race HQ at Gallarate and 40km from today’s MV Agusta factory on the shores of Lake Varese, at a price of Euro 22,000 upwards for a brand new 1090 (cost varies according to the specification chosen), or else via a conversion kit costing from Euro 8,000 upwards, which can be used to transform any existing MV Brutale into a Magni Storia.

Ducati 1299 Superleggera test: save the best till last

In creating the Storia, Magni has also concocted a modern-day salute to the most illustrious and certainly the most desirable MV Agusta four-cylinder streetbike of the classic era. This was the 750 Sport introduced in 1969, and built in limited numbers until 1980 when all MV Agusta production ceased, until it was revived in 1998 by Cagiva boss Claudio Castiglioni with the advent of the current Massimo Tamburini-designed F4 range. Ironically, from 1977 onwards all four-cylinder MV 750S frames were actually built by Magni, making the modern-day connection even more plausible with a bike that, back then, was both a performance and a style icon of its era, complete with its chrome mudguards, red leather seat, and distinctively-shaped anatomica fuel tank. But hitting the bullseye with the retro styling wasn’t easy.

“We rejected the idea of making a Magni frame for the Storia firstly because of cost, but secondly because the exiting Brutale chassis is very good, and it handles well,” says Giovanni Magni. “But it’s quite a challenge to produce an authentic classic appearance using such an emphatically modern platform as the Brutale, because an air-cooled engine has a certain presence, whereas here we’ve had to produce an old-style bike with a new-style liquid-cooled motor which is very much in evidence.”

In meeting that challenge, Magni has retained the stock Brutale 1090 chassis and powerplant, but dressed this up with traditional styling headlined by the hand-beaten aluminium 21-litre fuel tank, whose design closely resembles the so-called disco volante (flying saucer) styling of the 1973-76 version of the 750 Sport, with tricolore paintwork that’s however a Gallic red, white and blue rather than an Italian red, white and green. No, I don’t know why, either, but that’s the way it was back then, and this is how the Storia is today. Note that pre-2007 Brutale donor bikes require a different design of fuel tank than current models, to take account of their earlier chassis design with the engine sitting lower in the frame, before it was raised for extra ground clearance.

A new TiG-welded chrome-moly rear subframe that’s both wider and slightly lower is fitted to support the gorgeous-looking very ‘70s single seat gaudily upholstered in leather with quite firm neoprene padding. But the Storia’s most nostalgic feature is its pair of gracefully-curved nickel-plated exhausts with gently tapering megaphones that are just as much of a statement today as they were back then in doubled-up form on the classic MVs. You can practically hear their roar just looking at the bike at rest with the ignition off, though the headers are standard Brutale, including the catalyst beneath the gearbox. The twin slenderly curved exhausts deliver both a visual statement and the sound of music any lover of classic-era Italian multis has come to expect, plus a 5kg weight saving together with the 1kg lighter wheels.

Helping disguise the hefty mass of the large radiator is its pair of carbon fire shrouds, which like the various other CF items are made in Italy by TecknoMonster. But beside the aluminium mudguards and side covers, further retro features included in the transformation kit are the chrome-shelled round CEA headlamp with matching period rear light, the flyscreen-cum-wind deflector over the stock Brutale dash, and the pair of wire-wheels with CNC-machined Kineo forged aluminium rims permitting tubeless tyres, in this case the same Pirelli Diablo Rosso combo as on the stock Brutale 1090 that was the donor bike for Magni’s prototype on which I took a nostalgic ride down memory lane on a sunny summer day through the foothills of the Alps.

The Storia’s spacious riding position is almost identical to the original Brutale, with a slightly higher reach to the stock handlebar thanks to the lower seat subframe, although the bare metal footrests, while fairly sportily rearset, are mounted pretty high and very slippery without any rubber covering – same as the leather-upholstered seat, which is quite slithery. The one-piece handlebar with pulled back grips gives a good sense of control, as well as extra leverage for negotiating tight hairpins or city streets, and the Marelli ECU’s eight-stage traction control programme is as effective as ever, as I found for myself during a brief shower of rain.

But the whirr of the starter button is the opening chord in the introduction to the MV’s magnificently mellifluous aria issuing from those curvaceous exhausts pointing out back behind your right foot. You can’t help using a gear or two lower than you really need to, just to make the MV sing louder and longer, but it’s a melodic sound of mechanical music that is just slightly muted enough not to annoy others. Yet in spite of using the Mikuni ECU’s stock mapping, without any alteration to suit the different exhaust system, the Storia is still as rideable as the Brutale it’s descended from, to the extent that you have a hard time when running in city traffic in fourth gear off the pipe believing that its trademark radial-valve engine measuring 1078cc in capacity, produces as much as 144 bhp/106 kW at 10,300 rpm (at the crank), with maximum torque of 112Nm/11.4kgm/82.7 ft-lb delivered at 10,100 rpm.

However, there’s a surprise in store when you light up the radial-valve motor, because like the Brutale from which it’s derived, the Storia limps into life practically apologetically, settling to a 1200rpm idle speed with about as much aural accompaniment as – well, a Honda scooter. Oh, dear – what’s happened?? Fear not – it’s just the consequences of the electronic exhaust valve still fitted to the Brutale headers’ junction box, which stays practically closed while the bike’s in neutral, allowing you to warm the engine early on Sunday morning without disturbing your neighbours. Notch bottom gear, and you can trickle out of your driveway in subdued mode, until the revs hit the 2000 rpm mark, when the exhaust valve flicks open and normal MV Agusta service is restored, complete with the full array of melody from the stacked twin meggas.

As on the stock MV Brutale F4 the Magni’s pickup from a closed throttle is smooth and controlled, though even more vivid if you really insist on wrenching it wide open exiting a turn, as the TC will allow you safely to do. The Storia is packed with low and midrange muscle, surfing effortlessly into a howling high-revving rush of speed that’s totally intoxicating. It pulls strong and hard on part-throttle from just off the 1,200rpm idle mark, then wide open from just 2,500rpm upwards all the way to the 12,000rpm revlimiter, which you have no business ever finding because of the meaty torque curve you’ll revel in riding aboard the big-engined bike, with 115Nm of torque available at 8,000 rpm, and 80 Nm already available at just 4,000 rpm. Anywhere between 6,000-11,000 rpm on the comprehensively-detailed dash, complete with gear-selected digital readout showing at all times, will deliver serious acceleration and lots of thrills.

Despite its 1438mm wheelbase the Storia feels pretty short – as if your body is practically parked on the front wheel, and the way the slightly raised one-piece taper-section handlebar is pulled back just enough to deliver a riding stance that’s comfortable while still being sporty, gives the Magni the air of a minimalist Monster with added attitude – and extra performance. The fully adjustable 50mm Marzocchi upside-down fork and Sachs rear shock are plushly set up, meaning ride quality is quite good. But you can dial up settings as well as alter rear ride height to suit your own tastes and riding style, thanks to the suspension’s full adjustability at both ends, and Magni’s latest creation is totally stable and predictable under the stellar braking delivered by the radially-mounted Brembo Monobloc calipers.

While that glorious exhaust note never entirely lets you forget what you’re riding, this is two-wheeled classic eye candy of the highest order – and the fact that it goes quite a bit faster than it looks like it ought to, is all part of the appeal.