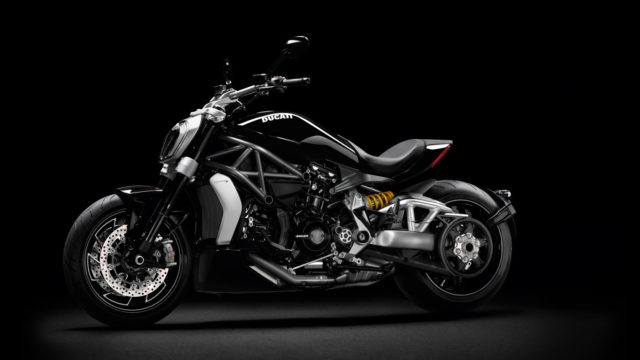 Ducati unveiled the X Diavel at EICMA in Milan, where it was quoted as the best looking bike. Indeed, the designer team did a great job, mixing the old Diavel looks with “American” elements as the belt drive and the foot-forward position. It has a huge rear wheel (240) which looks more like a car wheel than a motorcycle one, dark colors and LED headlights.

Unlike most of the cruisers, Ducati X Diavel seems to be a performer, boosting a high-specs Ducati DNA. The high displacement engine (at least for Europe) is capable of both high power at a redline rpm and large torque in small and midrange rpm and comes with the Desmodromic Variable Timing system already seen on Multistrada 1200 which actuates the valve differently according to the rpm regime.

You don’t have to be a proper drag racer to manage this power because X Diavel comes with a launch control (Ducati Power Launch) for high speed getaways. As for the rest of electronics, it has the latest Ducati technologies: cornering ABS, traction control, riding modes, cruise control.

The lean angle also seems to be a quite sporty one. With 40˚ lean angle is much more capable than other cruisers on the market.

X Diavel is the first Ducati motorcycle to have a final belt drive transmission, a must when it comes to cruiser market. Another “cruiser” feature is the foot-forward riding position. The triangle formed by the large handlebar, the different seats and the foot pegs can be set up in 60 different positions. So, the X Diavel should suit every rider.

Being a Ducati, it has the well known trellis frame and comes with Pirelli Diablo Rosso tires. The fuel tank has a 4.75 US gal (18 liters) capacity.

The dashboard consists of a 3.5” TFT color display and dedicated warning lights display.

Being a cruiser aiming the American market, the “custom factor” could not have been ignored by Ducati. So they teamed-up with Roland Sands who offers a whole range of accessories: comfort seats, Titanium exhaust systems and other custom parts which will be available at Ducati Dealers.

The new Ducati “Technocruiser” will also have an S version with glossy-black paint and day-running lights.

Alongside the X Diavel, Ducati launched a clothing line, which will be available at Ducati dealers from spring 2016.