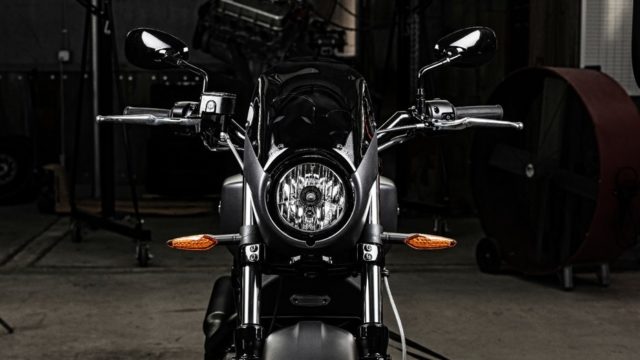 At the first sight, Victory Octane looks like an Indian Scout with a more aggressive stance. It’s not just an appearance. Polaris owns both Victory and Indian motorcycle brands, so it was no problem to borrow some things like the frame structure design. Brandon Kramer, Victory product manager, said in an interview for Cycle World motorcycle magazine that there are about 35% similar parts.

In fact, Victory Octane should be as fast as a Harley-Davidson V-Rod (which is more powerful but also heavier).

The guys at Victory say that this liquid-cooled cruiser is built for speed – and the front bullet cowl stands for that. It also has a 32-degrees leaning angle, but the position is still cruiser-like foot-forward, which doesn’t inspire sporty control. Also, it has a conventional fork (not USD, as the V-Rod) and a single front braking disc.

It has a cast-aluminum frame and a six-speed gearbox with short ratio for high-speed starts.

As for the customization, you can pick from one of the five packages (performance, extended reach, reduced reach, 2-up day trip, solo day trip) or for single accessories.

The Polaris officials also say that Victory Octane should be like an American muscle-car: light, fast, and affordable. So, how affordable it is? It costs $10,499 in USA – cheaper than an Indian Scout ($11,299) – and about the same as a Harley-Davidson Iron 1200 custom.