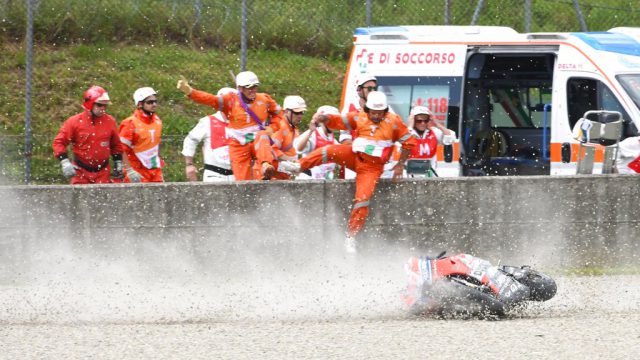 All riders in the World Championship, including MotoGP, Moto2 and even Moto3, are now required to wear a protective suit equipped with a functioning airbag system when they are on the race track.

The new safety regulation also concerns test riders and wildcards, not just the permanent ones. Even riders who substitute for a team’s unavailable rider fall under the same rule, but they can skip it, if they want, in the first GP of a season. If they will ride again, they must have an airbag like the rest.

Until now, only permanent riders were required to wear such a suit, and this is a surprise, albeit not a very pleasant one. Thinking about the high speeds during a race or even practice session, and the risk EVERY rider takes when he leaves the pit lane, we thought wearing an airbag was a no-brainer.

The only reason we can think if for not wearing one is related to the higher costs of the racing leathers equipped with ABS. But honestly, we thought that a rider’s safety during a crash was worth that extra cash a team has to spend on an airbag suit…

The FIM imposes this rule after Ducati’s test rider Michele Pirro was recently involved in a high-speed crash at Mugello, in FP2. At around 265 km/h (165 mph), the front wheel of Pirro’s Ducati locked, hurling him into a horrific high-side. Despite the violent crash, Pirro only suffered a concussion and a dislocated shoulder.

He was airlifted to the Careggi Hospital in Florence, where his shoulder was put back into place. A full body scan did not reveal other injuries or complications. However, given how hard and fast the crash was, we’d rather say that Michele is a very lucky chap, as things could have been much worse.

For GP racing, all riders will have to wear a functioning airbag in all sessions, and a new airbag is also recommended to those who crash during practice. “In the interest of safety, it is strongly recommended that any rider that crashes, resulting in their airbag system being deployed, should change their race suit before taking to the track again," the GP Commission adds.

Rider airbags are still expensive, but we can expect their prices to go a bit lower in the future. For the record, a pair of Dainese Misano racing leathers equipped with the D|Air airbag system is north of €2,000, if you’re looking for top-drawer protective gear.