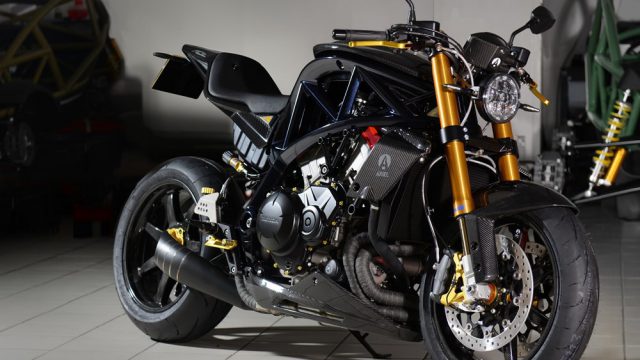 Ariel is building a new and more extravagant Ace. The R version comes with 201 hp, carbon fiber wheels and a big price tag.

When Ariel unveiled the ACE it was considered an exquisite bike – it had a 1,200 cc Honda VFR – derived engine which was tuned to develop 170 horsepower and 98 NM of torque. Only 50 were built.

But Ariel is pushing the boundaries further with its new Ace R. The 1,200 cc Honda V4 Engine comes with a 31 hp increase (the standard Ace was capable of 170 hp) and 143 NM. The V4 was tuned by MJW Specialists and it has new camshafts, an increased compression, a revised cylinder head and an another timing.

It’s not just about power. Ariel also cut some weight for its R special version. It comes with a lighter frame, aluminum and titanium fasteners, carbon fiber fuel tank, bodywork, and wheels. Ariel claims a 65% weight saving compared to the base model.

The suspension is also revised but it bears the same Ohlins signature.