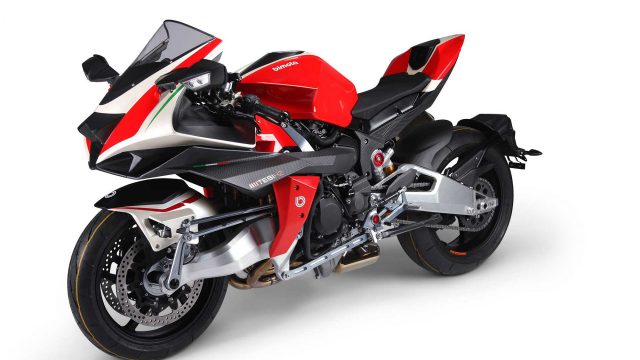 The Italian bike is heading for production in 2020. One of its features is the central-hub steering and the build quality includes top-end materials.

The Tesi H2 seemed to be a vision of how a Kawasaki Ninja H2 would look like in haute couture Italian clothes back in November at EICMA 2019. Kawasaki got in touch with the former Bimota Chief Project Engineer Pierluigi Marconi and showed him the plans to create a unique bike powered by the 998cc H2 in-line four-cylinder supercharged engine delivering 300hp. Now, Bimota is showing on social media how the bike is undergoing tests, especially for the ABS.

Unlike the Kawasaki Ninja H2, Bimota Tesi H2 uses hub-centre steering instead of the conventional forks. The system has the steering pivot points inside the hub of the wheel, rather than above the wheel in the headstock as in the traditional layout. In other words, instead of a fork, it has a swingarm that extends from the bottom of the engine to the centre of the front wheel.

Here's a test made by Bimota to show the Tesi H2's stability during hard braking.

Under braking the forces are redirected horizontally along the swingarm and help with the bikes weight shift, thus making it more stable. Hub-center steering improves steering geometry making the Tesi H2 more agile and consistent in the twisties. It separates the steering, braking, and suspension functions. The system also has some downsides like the steering feel which is vague and the handlebar movement across its range is inconsistent; Bimota models that had this system were Tesi 1D, 2D and 3D.

Another difference from the Kawasaki Ninja H2 is the frame –  not the trellis anymore, but a completely redesigned frame.

No news on the engine power. We know that the Ninja H2 has 231 hp and for the Tesi H2 rumours has it that it might have 300 hp – the H2R supercharged engine makes 310 hp.

The Bimota Tesi H2 was build using premium components such as aluminium machined parts, carbon body parts, forged wheels and handmade painting. On the Italian bike, they look more refined compared to the Kawasaki Ninja H2. Probably, the price will be higher, too.

More news comes from Bimota as they are preparing to build the KB4, a retro-looking bike as we can see in the video below.