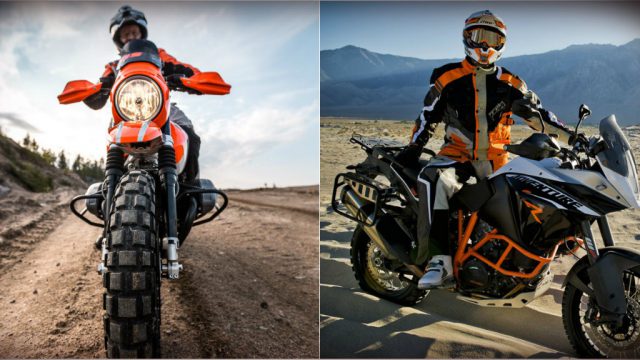 First time when I heard the news I thought it was an April Fools’ day joke. But it’s not. Two enduro experts will ride two +1,000 cc twins in the toughest hard enduro rally on Earth – the Red Bull Romaniacs. The off-road specialist Chris Birch will fight the German Gerhard Foster.

Chris Birch – supported by KTM – will travel from Mattinghofen (Austria, KTM Factory) to Sibiu (Romania) on a modified 1190 Adventure – that’s about 1,000 km. After that, he’ll swap the tires and join the Romaniacs show.

Gerhard Foster – former BMW factory rider and Red Bull Romaniacs veteran – has ridden BMW HP2 enduros in a variety of races and has also finished in the Gold Class Top10 five times at the Red Bull Romaniacs. Now he’s gonna ride a Touratech-prepared BMW R nineT. He will bring the BMW R nineT Touratech prototype (Code Name: R9X 7) to Sibiu by truck. There is no photo with the hard enduro R nineT yet. The bike pictured below is BMW's Lac Rose concept based on R nineT.

Both riders are professional Enduro trainers and frequent racers at Extreme Enduro events. They are both used to piloting “fat ladies”. Both bikes are heavily modified, the KTM Adventure by KTM and the BMW by Touratech. Will they manage to see the finish line? We’ll see on 25th – 29th  July.

The Red Bull Romaniacs Extreme hard enduro rallye was created in 2004 by founder Martin Freinademetz. Over the past years it has evolved to the world`s toughest Hard Enduro Rallye The Red Bull Romaniacs takes place every year and attracts riders from over 40 countries. The race is spread over five days, the first being the inner-city prolog in front of thousands of enthusiastic fans. The four “Offroad race days” lead the competitors on some of the world`s most beautiful enduro trails in the region around Sibiu, Romania (Southern Carpathian Mountains). The breathtaking wilderness, the Romanian hospitality and the unbelievable challenges make the 600 kilometer race an unforgettable, lifelong memory for all participants.