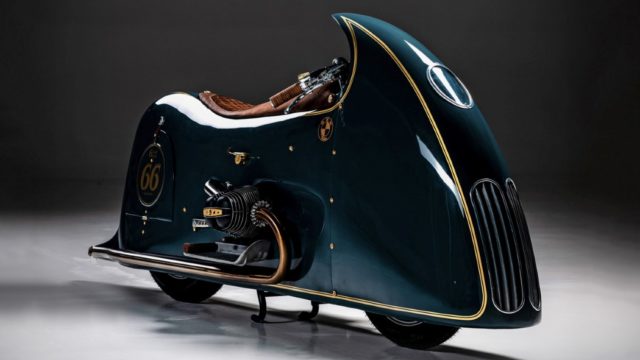 Hard to believe that this motorcycle was once a 1980 BMW R100RS. It looks marvelous and the credits go to Dirk Oehlerking’s Kingston Custom who customized the bike as part of their Phantom Series. This custom BMW motorcycle received the name Good Ghost after Dirk gave it a Steampunk treatment fitting a unique bodywork, a bunch of luxury components and making the rider feel as if he was living in the 1930s.

It’s not the first time Dirk Oehlerking is modifying bikes as he did before with Kawasaki, Honda and Yamaha models. Lately, he customized a lot of BMW motorcycles and this one, the BMW R100 Good Ghost, looks absolutely stunning we have to say.

BMW R100 Good Ghost was commissioned by Bobby Haas who is a car patron and owns Haas Moto Museum in Dallas, Texas where this motorcycle is put on display. Dirk Oehlerking chose for this project a 1980 BMW R100RS as a base model and made a few subtle changes to the bike’s original chassis. Thus, at the core, this BMW R100 model is as original as it can get for a custom motorcycle.

The design of the BMW R100 Good Ghost was hand-shaped and features a 2mm-thick aluminum paneling covering the underlying structure of the bike and adding a steampunk look to make the motorcycle stand out. The whole bodywork was manufactured to make the R100 look like a ghost as we can see that the fairings hide both wheels. A very nice feature is the iconic BMW split kidney grille (a feature on every BMW car) which was designed on the front fairing of the Good Ghost.

In typical BMW fashion, the motorcycle is covered with luxury components. The saddle is made of leather and starts from the dash and continues all the way to the tail unit. It may look awesome and probably easy to manufacture, but it’s not. To fit the saddle on the bike, Dirk needed to cut into the fuel tank and that process would have involved a lot of technical issues for the bike. So, he came up with a solution by fabricating a small fuel cell to sit behind the transmission, with an external fuel pump. After all this craftsmanship, the entire leather seat lifts up to reveal a tiny compartment underneath which holds a bottle of wine and a glass. As we said before, the BMW R100 Good Ghost was designed with a bunch of luxury features. And that’s not all. The lift mechanism for the seat even has a corkscrew and a spare spark-plug. Also, the dashboard is covered in leather.

The BMW R100 Good Ghost features a headlight designed to look like it’s borrowed from a 1930 locomotive. A flap beside the rear wheel opens to reveal a toolkit with all the necessary tools to fix this motorcycle if it has any technical issues on the road. Moreover, as this custom motorcycle was designed to be a “gentleman’s bike” the flap on the opposite side stores a selection of century-old silverware. Indeed, the BMW R100 Good Ghost has a 1930s appeal. The rear unit is equipped with a pointed flair that combines both tailpipes and the taillight. A nice touch is the design of the tailpipes which start from the boxer engine and follow the fairings design lines curving all the way to the rear unit.

The BMW R100 Good Ghost is designed as a remarkable and unique motorcycle and we rarely see a custom motorcycle which succeeds in bringing back a certain period of time. This one does as it manages to send the rider back to the ’30s or bring the ’30s to our time. Either way, it’s a great project and we still wonder about the price tag of this BMW Motorrad. But, there are no details on that matter.