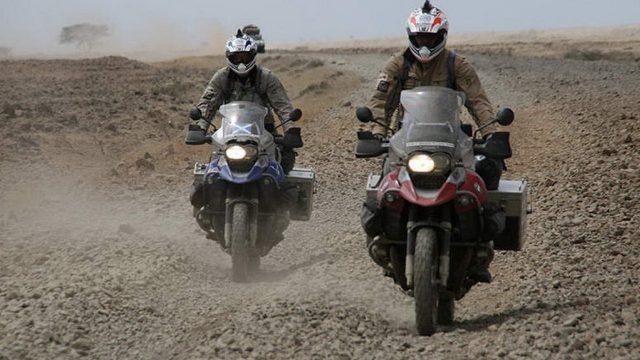 Our planet is certainly round and it’s the perfect place for long adventures. Ewan McGregor and Charley Boorman ride again, but this time it’s the Long Way Up.

Aside from being successful actors, Ewan and Charley attained their fair share of glory in the motorcycling world with their seminal adventure TV series The Long Way Round, which took them from London across Europe and Asia to Magadan in Siberia, across Alaska, Canada and the US, then back to London. Then they went to the southern end of Africa in their Long Way Down. Now it’s time for The Long Way Up, a whole new biking adventure taking them to South America.

At this year’s Bike Shed show in London, Charley confirmed the plans while talking to Bremont Watches’ Nick English. “I’m doing Long Way Up for sure, with Ewan. We’re doing South America to Los Angeles, so South America, Central America, Mexico and then LA. We’re going to start that in a few months’ time, and hopefully do it, yeah,” Boorman declared openly and happily.

However, there’s more to this new adventure, as Boorman himself reveals. “We’ve got a few little surprises. We’re not going to do it traditionally, so there’s going to be a little twist,” he adds. We still have to find out what this “non-traditional” ride is all about, so we’ll keep an eye on the matter.

Even though Charley made no mention about the subject, we can expect that the adventurer duo will be using BMW’s latest machine, the 1250 GS Adventure, most like with some extra bells and whistles to it. However, this whole mystery thing led some into believing that they could use some retro/new-old stock-type machines this time, just to make a point as to how reliable BMWs are. Taking this option with a big chunk of salt, though, as both riders are involved in marketing for other brands.

So hopefully, we’re all back in action in several month’s time, together with Ewan and Charlie. In the southern hemisphere it’s winter now, so we can expect this new adventure to start somewhere in mid-autumn or even a tad later when spring breaks and makes Ushuaia rideable.