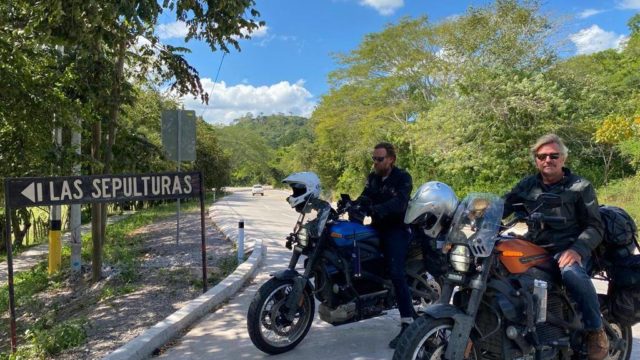 The adventure riding stars, Ewan McGregor and Charley Boorman are back on TV this time around their latest show Long Way Up will be available for watching on Apple TV+. The trip started last year and lasted three months while the two riders rode a couple on Harley-Davidson LiveWire bikes through South America on an 8,000 miles adventure tour.

It’s not every day we get to see a rider travelling the world on an electric motorcycle. Well, as you probably know by now, Ewan McGregor and Charley Boorman did so by taking two Harley-Davidson LikeWire motorcycles on and motorcycle adventure tour to Argentina, Chile, Peru, Ecuador, Nicaragua, Guatemala, Mexic and California, Los Angeles. The motorcycle trip started in September 2019 and ended in December last year after the riders rode 8,000 miles on electric motorcycles.

Long Way Up ended in mid-December and since then the fans waited for an aid date to be announced by British broadcaster BBC. It seems now that we’ll have a chance to see Ewan McGregor and Charley Boorman’s motorcycle tour on Apple’s streaming service. Moreover, streaming services became a new generation of cable TV, but if you want to have access to your favourite shows, you’ll have to pay for different subscriptions. So, this is the case for the Long Way Up which is available now on Apple TV+. The service is available for the price of $4.99 per month after a free 7-day trial. Also, for Apple customers who purchase an Apple device and redeem the offer within 90 days, the Apple TV+ is included for one year.

Apple TV+ was launched last year and features Apple’s own content and some content of certain channels. This is the case for Long Way Up according to Variety. Apple purchased the rights for shows like Prehistoric Planet and Long Way Up. As we are eager to see Ewan McGregor and Charley Boorman’s motorcycle tour, Apple didn’t announce a release date for Long Way Up at the moment. So, for now we’ll have to wait and see when the show will be launched on Apple TV+.

Long Way Up began in Argentina’s southernmost tip and ended in California, Los Angeles. The guys had a team which followed them along the way in Rivian R1T electric pickup trucks in case they needed any assistance. Also, Ewan McGregor and Charley Boorman‘s team included two spare Harley-Davidson Livewires, two Mercedes-Benz Sprinter 4Matic and a 6.2 litre V8 Ford F350 to make sure everything goes as planned.

The challenge of Long Way Up was to adapt the two electric Harley-Davidson LiveWire bikes to offroad conditions and to see how an electric motorcycle could face harsh conditions. Not to mention that is a challenge itself to charge the bikes when you ride in areas with no charging stations, but most likely that’s why the team included the following vehicles to make sure that Ewan McGregor and Charley Boorman can charge their electric motorcycles and continue their journey.