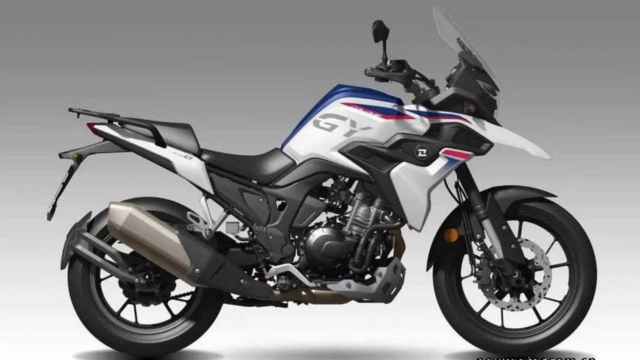 Asian knock-off have been around for ages, in all industries, but the latest discovery is a bit too much. The Everest Kaiyue 400X is the new Chinese BMW G310GS… of sorts.

The success of the India-made BMW G310GS could not be missed by a Chinese manufacturer who is planning to add their own version of the bike to the line-up. Dubbed Everest Kaiyue 400X, this two-wheeler replicates the small-displacement German bike down to details such as the color scheme and a mock-up logo that resembles the famous GS badge.

For lack of a better replacement, the Chinese guys had a GY logo on the sides of the tank, but the lettering is almost identical, in a clear attemp to make it look like the one on the diminutive BMW. The front mudguard and radiator shrouds also look heavily inspired by the German bike. And yes, the Chinese copycat even has the signature “handles” on each side of the headlight, and the rear mud scraper, too.

The Everest Kaiyue 400X sports a 378cc parallel twin engine made by local manufacturer Zhongshen, mated to a 6-speed gearbox. Reportedly, the mill produces 36 hp and a peak torque of 35 Nm, slightly better than what the 313cc German single delivers (24 hp and 28 Nm).

Kaiyue 400X also has inverted forks and a single rear monoshock, while dual 296mm rotors equip the front and a 240mm one can be found in the rear. Dual-channel ABS is also present. Obviously, the Everest Kaiyue 400X’ price is lower than that of the BMW: the German machine is around €4,280, whereas the Chinese knock-off is said to have a €3,890 price tag.

We’re eager to see how BMW will react to this. Land Rover filed a suit against the makers of an Evoque copycat SUV in China years go, which they recently won. A sales ban for the said vechile was enforced. Wonder if BMW will follow the same course of action. Our bets is they will, because this is downright outrageous.