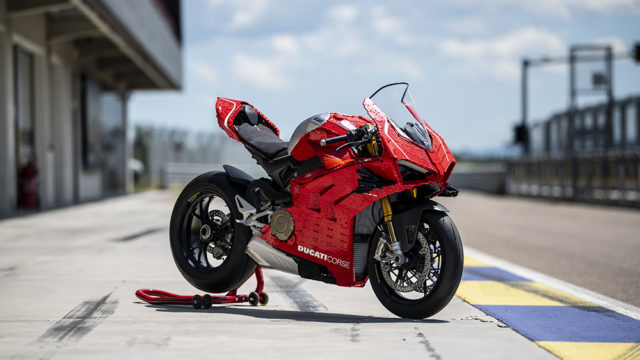 After building the first brick model, Ducati, in partnership with LEGO, made a full-scale model of the Panigale V4R model. Yes, it's a real size superbike made of LEGO bricks and it was created by Riccardo Zangelmi. Also, it's available for purchase at the price tag of almost €60.

It was unveiled today at the Modena track in Italy alongside the Ducati MotoGP Team rider Andrea Dovizioso, Paolo Lazzarin, General Manager of LEGO Italia and Claudio Domenicali, Ducati CEO.

The Ducati Panigale V4R Lego Technic is hand-built from a total of 15,000 Lego Technic bricks and it took 400 hours to complete the whole manufacturing process.

"I am very happy because I never imagined I'd have the chance to unveil a bike like this. Almost everyone at some point in their lives has played with Lego bricks at least once, but seeing up close a replica of the Panigale V4 is something incredible and at a very high level. I would like to congratulate the LEGO artist Riccardo Zangelmi for building such a true to life and detailed version of the motorcycle. I'm sure children and adults alike will be captivated by this incredible model," said Dovizioso.