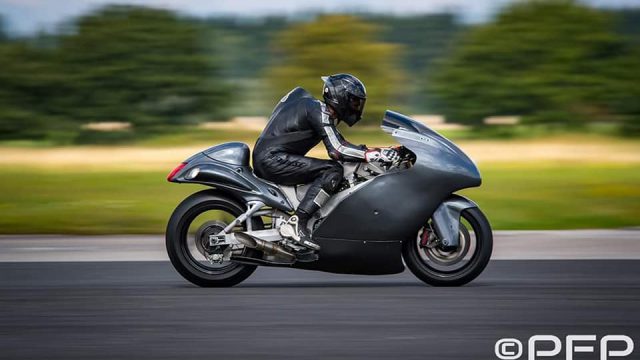 Guy Martin sets a new UK speed record – 270.965 mph over a measured mile from standing, according to MCN.

The bike: a streamlined, 830 bhp Suzuki Hayabusa. The "Busa" was turbocharged and tuned by Jarrod "Jack" Frost. "He was made up to do 270mph, but now he wants more. In the end, we stopped for wind but it was really all in his head. If he can get past that, he can do it easily," said Mr. Frost in an MCN interview.

It's not the first run with the Hayabusa for Guy Martin on Elvington Runway. There's a YouTube video with Guy Martin hitting the 257 mph [413 km/h] on a standard fairing Suzuki Hayabusa.

The motorcycle land speed record of the moment was set by Rocky Robinson, in Bonneville, on a 2,600 cc, Twin-Suzuki engines streamliner machine. It hit 605 km/h [376.3 km/h].