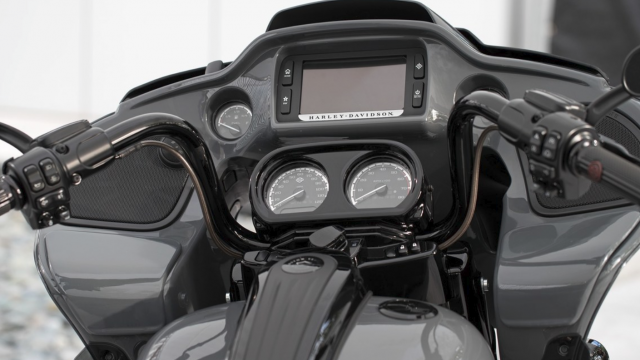 Harley-Davidson filed a patent for an automatic emergency braking system that could make it on their motorcycles in the not-so-distant future, and it seems like a good thing

After the recent announcement regarding the massive line-up update, Harley-Davidson does it again, with yet another move aimed at bridging the gap between the old classic technology and the 21st century. H-D has filed a patent for an automatic emergency braking system that replicates the ones we can already find in many cars.

The first thing that came to mind is that emergency braking when riding a motorcycle is already a tricky thing that can lead (and unfortunately, often does) to crashes and injuries. Having a machine doing that for the rider sounded even wackier, but taking a closer look at H-D’s decision-making algorithm made us change our mind.

Well, most scenarios that require hard, emergency braking are usually split between two types. The first one, and the most common, involves an external factor that interferes with the bike’s natural trajectory. Other motorists not giving way, vehicles in front braking hard unexpectedly, jaywalkers, and the list could go on and on.

In the second scenario, the rider usually fails to properly asses a traffic situation because of lacking experience, being distracted by looking in the mirrors or elsewhere. By not applying the brakes in due time a rider is then forced to brake harder than usual to avoid a collision. Naturally, we thought what would happen if a motorcycle performs an emergency brake with a distracted rider astride?

Well, Harley asked themselves the same question and came up with an algorithm that verifies certain aspects before slamming the brakes on. The outline of the entire course of action is rather simple and ingenious, and relates to assessing that the rider is ready for such a move.

From get-go, the MoCo’s bikes will be equipped with an array of dedicated sensors that continuously scan the surroundings for signs that indicate a potential collision. In case a dangerous situation is detected, the system will check if the rider is already applying the brakes, and if yes, if the braking force ensures the maximum deceleration possible within safety limits. If the rider is braking hard enough, the system disengages. If not, the automatic brake control adds more power to the brakes, “to the point of max deceleration possible.”

Now comes the interesting part. In case the rider is not braking already, Harley’s automatic brake will check the “physical engagement with the motorcycle.” This means another set of sensors that make sure that the rider is in the seat, with both hands on the bars and “alert and paying attention.” Most likely, a camera will be also installed in the bike’s dash, with a computer analyzing the rider’s stance and behavior.

In case all is okay with the rider, the system will close the throttle and apply the maximum deceleration force. If the rider is distracted, alerts will catch his or her attention, probably acoustic signals, dashboard flashes and possibly grip vibrations. A short delay time will occur and then the bike will brake hard.

The algorithm is far from being perfect for all scenarios on the road, but let’s not forget this is only the first iteration. Plus, microprocessors are nowadays quite fast and can compile a ton of sensor data, therefore being able to run more complex routines for extra safety. And then there’s also cornering ABS…

No word on when will this technology make it into mass production, but it may not be too long until we see Harleys loaded with top-drawer electronic safety systems. Now, what’s your take on such a step Milwaukee might take?

READ MORE on technology: Beeline Moto, the minimalist navigator that could