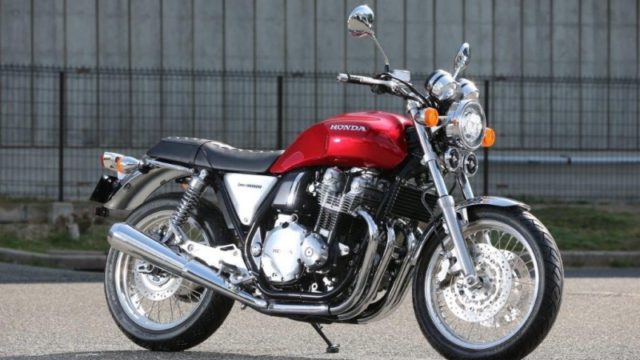 Honda revealed CB Type II – a CB1100 based cafe-racer which could hit production next year.

BMW has the R nineT, Triumph revealed a whole new Bonneville range, the Moto Guzzis are all about classic – every bike manufacturer has revamped its heritage range. All except Honda and Suzuki. While Suzuki is still asleep, Honda gives us some clues about its classic-class future.

The CB Type II, revealed at Tokyo Motor Show is a cafe-racer interpretation of the CB1100. With a large displacement air-cooled inline four, it embodies the Japanese classic style, matching the Yamaha’s XJR 1300.

So, we have a classic CB1100 with reshaped tank, cafe-racer style seat and small mirrors fitted under the handlebar. The fork remains a classic one and not an upside-down, although it has an “upside-down-like paint.”

The brakes consist of radial-mounted Brembo calipers and dual-discs on front, the rear suspension is an Ohlins, and the tires come from Pirelli. The headlight and taillights are LEDs. We’re not sure that the carbon front-fender and titan exhaust will still be available on the production version, but the CB1100 racer still seems to be sportier than the classic version.

Yamaha XJR 1300 is the only inline-four competitor, with a 98 hp – 108 Nm muscular engine and Ohlins rear suspension. It has a racer-style similar fuel tank and a solo-seat style design, while the aluminum side cover embodies the 70s racing spirit.

Triumph Thruxton R is the most powerful and fastest bike from the new Bonneville family. It comes with a high-spec front suspension (Showa), rear suspension by Ohlins, Pirelli Diablo Rosso Corsa tires and cafe-racer styling and riding position.